If it has seemed lately that Sondheim's Sweeney Todd, arguably the crowning artistic achievement of the American musical theatre, was likely to spend its old age in the opera house, then consider the current revival Broadway's resounding objection. John Doyle's production, which I saw last week, is Sweeney's pumping theatrical heart laid bare--as though you had pared back the skin of Sondheim's music drama to watch how everything works underneath. The effect is rather breathtaking, and while by definition a far cry from the platonic Sweeney, it is deeply compelling and a stunning testament to the power of this work. 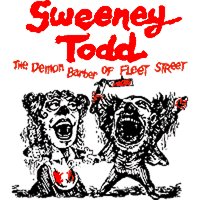 The performances of Michael Cerveris and Patti Lupone follow brilliantly from the bare bones aesthetic. Each effortlessly strips away what operatic excess exists in these characters to arrive at the dark cores which propel the plot. Cerveris' Sweeney has had the humanity hollowed out of him by revenge and bitterness, and the audience understands fully that even his lighter moments are no more than a murderer's thin attempts to get closer to his victims.

Lupone's Mrs. Lovett is perhaps even more remarkable, considering the death grip Angela Lansbury's characterization has on this role. But this isn't the batty and sympathetic Mrs. Lovett who operates in an alternate moral universe. Here she is defined by one simple fact: a gaping void of personality smack in the center of her soul, a void which leaves her a moral cripple. As the beggar woman says, she has "no pain in her heart", and that creepy absence, so unflinchingly portrayed by Lupone, lets us easily believe she can commit the crimes she does.

However, it shouldn't be understated that this Sweeney naturally leaves something to be desired. There's just no getting around the fact that the actors as orchestra gimmick, while done ingeniously for the most part (props to arranger Sarah Travers) can't help but leave you with a hollow shell of the full experience of this score, which, in Jonathan Tunick's orchestration, is surely the most spectacular noise to ever grace a Broadway pit. For those of us who can sit there with the original cast album playing in our heads, its possible to make do and notice some interesting things. But to someone unfamiliar with the score the impression must be a far, far cry from the way this music should be experienced.

The singing is better or worse depending--Lupone, Lauren Molina as Johanna, and Alexander Gemignani as the Beadle are the standouts. On the other side, Benjamin Magnuson, while a talented performer, falls well short of the lyric requirements for Antony, and, in a bizarre choice that doesn't work, Pirelli is sung by a woman. But the biggest loss is where it hurts the most. Either through limitation or choice, Cerveris basically avoids the serious vocal writing for Sweeney altogether. Especially in the soaring lines of places like the "Now he'll never come again" sequence, it's a bit like watching your Wotan give "Leb Wohl" the Rex Harrison treatment.

Those reservations notwithstanding, however, there should be little doubt that this is some of the most exciting musical theatre to be seen this or any year. Do it!
Posted by Alex at 3/17/2006 11:04:00 AM