J: statistics?
A: naw
A: Mikro
J: blech
A: can't sleep?
J: precisely
A: boo
J: I did for awhile
A: I am writing about the idea of deregulating the market for livers
A: it is gross
J: um
J: ew
A: liiiiiverrrrs
J: wait like
J: duck livers
J: or like human transplant livers
A: human
A: like, if you could just go out and buy a liver instead of the whole waiting list thing
J: right
J: ebay!
A: haha
A: exactly
J: "shows signs of wear. seller has 89% positive feedback rating"
A: haha
J: seller accept PayPal ONLY
A: ha
A: did you know that China sells off the organs of all the prisoners it executes?
J: huh
J: so I guess they don't do electric chair
A: I guess
A: probably not firing squad either
A: wow...that is some morbid conversation for 4/5 in the morning
J: it is
J: wait the best would be the ebay feedback:
J: aweomse seller!!! Liver exactly as described. Works perfectly. a credit to ebay A++++++
A: haha
A: that's genius
J: hm i want my cat
A: I suppose i should schlaf and look at this in the morning
A: good luck...
J: thanks
J: night
A: 'night
J signed off at 4:20:46 AM.
Posted by Alex at 11/29/2006 01:45:00 PM 1 comment:

Wagner and Karólína: On Ice 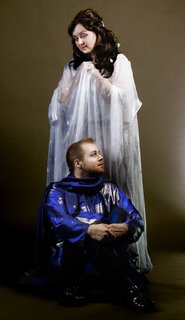 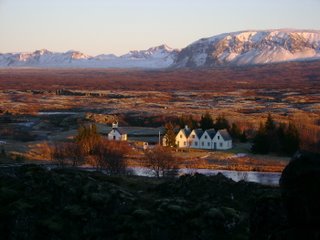 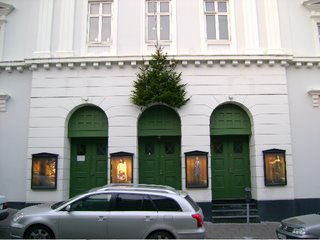 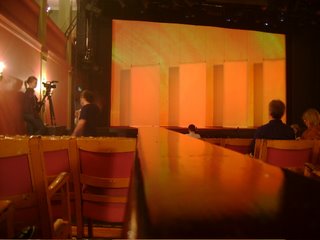 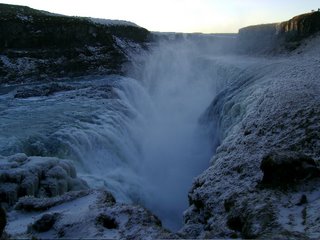 So, *somewhat* on impulse, but with enough lead time to get my opera tickets in order, I skipped out on the turkey this weekend and instead gave thanks Wellsung-stlye in Iceland.

And what a weekend...from half a dozen different kinds of herring to volcanic craters to cocktails and hot dogs with a particularly hospitable contingent of Reykjavik's classical music community, it was a weekend worth blogging.

After initial explorations of the city on Thursday afternoon, and a platter of lamb unlike anything I believed possible, I trekked over to Háskólabíó, a cinema connected with the university campus in Reykjavik. Until the Sinfóníuhljómsveit Íslands moves into their new space in the soon-to-be-revamped Reykjavik harbor in 2009, they are housed in an unglamorous but perfectly adequate hall within the cinema complex.

(The program was Wagner: the Prelude and Liebestod from Tristan und Isolde and, working surprisingly well as a concert piece, the entire 3rd act of Parsifal, featuring the formidable Gurnemanz of Icelandic bass Kristinn Sigmundsson. Spoiled as we all were by Rene Pape's spectacular G-Manz last season at the Met, I went in fully braced to be underwhelmed. I was in for a seriously pleasant surprise: At least in this intimate space, Sigmundsson's performance resonated every bit as richly as Pape's, and was infused with emotion and elegance.

The rest of the singers fared decently well: Ruth-Maria Nicolay had an intense (bordering on terrifying) presence, but a smallish voice. Consequently, she was often drowned out during the Liebestod, but was admirably committed to Kundry's wails and screams during the Parsifal. In her defense, from what I could glean from the website, she was a replacement for Petra Lang, who became unavailable(?) (spake I any Icelandic, I'd know for sure. Perhaps one of our new pals from the symphony can fill us in).

Kolbeini Ketilssyni and Wolfgang Schöne turned in respectable if not thrilling performances as Parsifal and Amfortas, respectively. I couldn't tell if Schöne was legitimately cracking up top, or if he was just doing some Hampson-style emoting. Nonetheless, I found it peculiar. Kolbeini is a light voice for this rep--it worked nicely in that space, but would be lost on a larger house.

The star of the evening was the spectacular Iceland Symphony Orchestra. They should give a master class to the NY Philharmonic. They played with the precision and commitment of a fine chamber ensemble; it was some of the tightest work from an orchestra of that size I have ever heard. Speaking to some of the players in the ensemble, they deflect a lot of the credit to the guest conductor that evening, Johannes Fritzsch. And from what I could tell, this music is deeply felt by Mr. Fritzsch, and manifests itself physically in his conducting subtly and effectively.

See some of Alex Ross' thoughts on this orchestra here.

So that was Thursday evening.

Friday was full of waterfalls, national parks, volcanic craters, northern lights hunting, and geysers (did you know that the word "geyser" in English actually comes from the Icelandic "Geysir", which was the name given to the first of this sort of geothermal activity discovered on the island?)

Saturday brought some museum-hopping, and more lamb. After a quick visit to the illuminated manuscripts of the Icelandic Sagas, and a quick change of shoes and light dinner I headed over to the Íslenska óperan, Reykjavik's very intimate (450 seats) opera house in the center of town.

The performance this evening was the premiere of a new Icelandic opera from composer Karólína Eiríksdóttir entitled Skuggaleiker (English title: Shadow Play). Based on the Hans Christian Andersen story The Shadow, the opera has four characters: A Poet (tenor), His Muse (Soprano) and their Shadows (a counter-tenor and mezzo, respectively). I would have trouble summarizing the basic action of the opera, so here is the english language synopsis on the company's website.

I don't really have the vocabulary to discuss Karólína Eiríksdóttir's complex score. It is music of a contemporary nature to which my ear has never fully adjusted, but there are some beautiful and unexpectedly lyrical lines for the Muse, and some heartbreaking passages for the Poet--Karólína places them late enough in the piece that the uninitiated listener has enough time to adjust to the challenging musical language to be able to appreciate these refreshing moments of lyricism.

The production is very simple (see a picture of the set to the right)--a set of rectangular white panels with slowly shifting lighting cues and a series of related projections.

The four singers: tenor Eyjólfur "Eyvi" Eyjólfsson, soprano Ingibjörg Guðjónsdóttir, mezzo Ásgerður Júníusdóttir, and countertenor Sverrir Guðjónsson display some serious musicianship in their ability to learn and deliver this incredibly challenging score. My biggest compliments to Eyjólfur and Ingibjörg (see picture on the right), two singers from whom I imagine we will be hearing a lot more. Both have effortless voices that, judging by their ability to make it through this piece and deliver some of their finest singing near the end of the evening, are also tireless. Eyjólfur, in particular, sings with the sort of strength and clarity that will make him a true competitor on the international stage.

The setting was intimate and informal enough that I stuck around after the performance to meet some of the cast and creative team, as well as some members of the symphony who were in the audience that night. Fortunately for me, these are some of the friendliest, most inclusive people I have ever had the pleasure of meeting. Several cocktails and a couple of shockingly delicious Icelandic-style hot dogs later, I was able to officially name that evening as the standout of an alotgether incredible weekend.
Posted by Jonathan at 11/27/2006 11:27:00 AM 1 comment:

So, I snuck into NY under cover of night this weekend to catch the last Budderfly, among other things (i.e., my little sister TEARING S**T UP in an NYU "Once On This Island".)

So, let's get it out of the way: I had the misfortune of joining Maury for my first tour in the Met penalty box during the first Act on Saturday. After many years of faithful devotion to the Queensboro Bridge for all my midtown entry needs, I forsook it for the #*(&$*& Midtown Tunnel and was roundly served my kharmic deserts: Islip to Greenpoint Ave: 1 hour...Greenpoint Ave to 2nd Ave: 45 minutes. Arg.

And things jes' got more interesting from there. Intermission 1 lasted about an hour, due to "technical difficulties". Eventually resolved, we finally got down to business:

CDG: Gah...what a maddening singer. Her big n' loud I found really quite awesome. She's a formidable actress and stage presence for sure. But the rest is really inexcusable. I actually saw the point in some comments made here a while back--that Levine's pacing may have been too slow for her. But like...one should think our opera singers would be able to maintain support at a variety of tempi, not just the fast stuff and big FX.

JL: Well, I suppose there are reasons he stays away from the Puccini. The pit was really one of the demerits of the evening. One could see him trying to apply that clinical dissection/reconstruction thing that works so f'ing brilliantly in Berg and Mozart. But Puccini don't roll like that--it just falls apart if you try to take it in pieces. Best to just play the darn thing.

The Production: Not that I need to say anything more here. All hail this kick-ass production.

Creepy Awesome Puppet: OMG. Who the hell didn't like the Trouble-puppet?? It was BRILLIANT. There's something about having a real child in the presence of especially dramatic or gory stage business that's always a bit lurid--some part of you is uncomfortable with someone in the performance who isn't fully aware of the proceedings, and it detracts from the drama. Butterfly w/ actual little boy suffers from this in spades. But Butterfly w/ boy-puppet? Perfect solution.

The technical difficulties weren't the end of the fun, though. CDG bailed on the last act of the run and instead we got one Cynthia Lawrence, who was quite good really. No special revelations I suppose, but quite powerful and just what good lyric soprano money should buy.

A: some parts of Messiah kind of sound like "Rent"
J: really??
A: some of the recitative parts
A: that are just a bit too tuneful for normal recitative
A: but just about right for "Rent" recitative
A: and the strings come in all "ba-ba-ba-ba ba-ba-ba-ba"
J: btw I am at Postworks QCing an output
A: what did the output do to you that you need to QC it?
J signed off at 9:54:11 PM.
J signed on at 9:56:25 PM.
J signed off at 9:58:25 PM.
J signed on at 9:59:15 PM.
J: ok the wireless here is sort of crap
A: apparently
J: they have two networks and I have switched to the other one
J: which parts of Messiah sound like the Rent?
A: I'm just basing that on the recitatives that lead into the "Glory to God" chorus in Part I
J: oh hah
A: I kind of like the idea of Messiah as "the Rent" of 1742
A: people are clamoring for "Unto Us a Son is Born" at harpsichord bars across London
J: haha
J: confirmed bachelor harpsichord bars
A: hehe