Seeing as how I don't understand sung French so well, if MJ didn't keep reminding me that the story is completely wack I might just say Mignon sounds better than R&J, as puffball French operas go. The MODB has it as the second most popular opera not performed in the past half century (reigning champ is Meyerbeer's Les Huegenots).

Now why don't crazy opera directors revive things like this and go to town on them? Unlike, say, Madame Butterfly, which really ought to be left alone, Mignon is just begging for some deconstruction. French opera of that period gets uncomfortable because the 19th century archetypes age so poorly (being embarrassed by the past is a funny phenomenon, isn't it?), so a production that earnestly unpacked some of that would be neat. I say bring on gun toting Native American Mignon in space.

Finally back in the good graces of Internets radio--all my audio up and stopped for about four days, taking the Met along with it. Only required a complete reinstall of the OS. (HP support blows.)

Fortunately we had some non-auditory musical entertainment for the weekend: 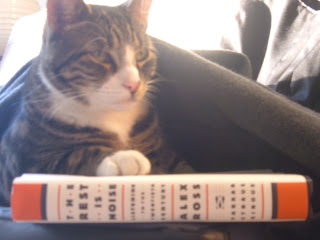 First trip to the CSO this evening...Mozart Symphony #25, a premiere by the British composer Mark-Anthony Turnage, and the Brahms 2nd Piano Concerto with Emmanuel Ax for the main event. I was really there for the Brahms, so that is where I shall begin:

Haitink's hyper-precise thing is really well suited to Brahms, especially in as rich and polished a work as the second piano concerto--try to force too much on this piece and you'll just spoil the thing--you get fake articulation where the precisely correct articulation was there all along. But Haitink conducts with the optimum expression of the notes on the page in mind, almost to the point of obsession, and nowhere was it more evident than the Andante. He built the thing from the ground up, hunched over the podium like a car mechanic, twisting and prodding each color and harmony into just the right place before moving on. Letting the details shine through where one usually gets Brahmsian fog made this piece thrillingly new.

Emmanuel Ax gave a tremendous performance even if there is a part of my Brahms luv that yearns for the kind of manic precision someone like a Pollini could deliver in this part.

The Haitink thing is less successful in Mozart. I wanted to be into it and go along with the experiment, but at some points it sounded a bit like Haitink was leaving the poor thing stranded, refusing to impose the structure that old-pro Brahms doesn't need, but maybe 19 year old Mozart does. That said, there were some find moments, especially that beautiful little wind interlude in the (I think) third movement.

I need to think about the Turnage a bit more, but promise I'll post later.
* * *
So, here's a random Sandow-eque suggestion. The CSO is doing a really nice job with program notes these days--besides the standard biographical context and musical breakdown, they offer some insights into the bigger reasons why such and such piece is interesting. I.e., in the notes for the Mozart:

The opening of this symphony is probably the earliest music that sounds wholly Mozartean to our ears--not the charming, finely crafted, yet slightly anonymous music of the period, but something utterly individual, music that leaps from the page and lodges in our memories...A second theme in B-flat major, provides contrast and a glimpse of the generic musical world Mozart was quickly leaving behind.

This kind of thing allows the occasional or semi-occasional concert goer (among which I certainly count myself as far as Mozart symphonies are concerned) to situate the works in his or her own musical knowledge, even if they haven't thought about Mozart symphonies for a while. It sticks with you and helps to deepen your perspective and critical ear even if you're only going to two concerts a year.

So why don't we do something similar in the performers' bios? It isn't rocket science to figure out what people mean when they say they don't go to classical music because they don't 'understand' what to like in a performance. It's not a lack of deep musical knowledge, its just the simple fact that even if you go twice a year, you probably don't have enough reference points to judge another randomly selected performance out of the vast world of soloist/orchestra/repertoire configurations. So let's get someone to write a few interesting paragraphs about where Emmanuel Ax and Bernard Haitink fall in their respective worlds, what some of their specialties are, and what qualities set them apart.

A successful classical listener needs to want to learn something about classical music outside of what's going on onstage. It isn't as easy to get to a basic level of appreciation as it is with pop music that speaks directly to our era and comes in 3-minute packages. That's just the nature of the beast. But we can do everything to ensure that going to a classical concert is more than just one opaque data point in the concert going experience, we can actively try to get people interested in learning about the performance world and different or similar experiences to be had than what they're seeing at the moment.

Naturally this would require a change from the safe C.V. feeling of most program materials, and might make some uncomfortable. But the current impression an occasional concert goer gets in uncharted territory, that everyone in the classical world likes everything else, and it's all swell and beautiful and pristine is a big liability. Clearly, people who are engaged with the music don't talk about it like this, so the challenge is getting people past the edifice to the far more interesting debate on the other side. It's time we measure victories in the number of occasional listeners who can walk out of the orchestra and mutter "Haitink's Mozart really sucked ass."
Posted by Alex at 10/26/2007 02:52:00 AM 3 comments:

Re: Jenufa in Hollywood

Um, hey California...why is everyone hating on the boulder set in the Met Jenufa? 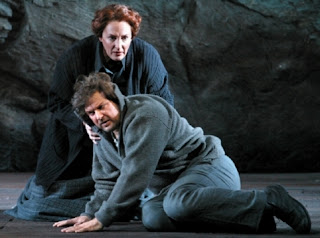 (Actual boulder may vary in size.)

If you can't say something nice about our boulder, don't say anything at all.

Seriously tho, it is great that this production is on the road and everyone is getting to bask in the awesomeness--with Matilla sure, but Silvasti and Begley too. Despite that gonzo central performance, the huge appeal of the New York engagement was ultimately in the remarkable ensemble. Eva Urbanova sounds great.

8:22}Guleghina just made me turn down the volume on the computer. Hells yeah.

Things you learn on Sirius

So wait...Werner Klemperer, the guy who played Colonel Klink on Hogan's Heroes, was actually the son of Otto Klemperer, and also had a late career doing funny parts at the Met, like the Pasha in this 1980 Entfuhrung w/ Levine, Battle, etc. that's on right now? That is one kick ass piece of trivia.
Posted by Alex at 10/22/2007 02:06:00 PM 4 comments:

I'd weep for that

Lisa Hirsch has a game about pieces of music that make one cry, originally inspired by this clip of Esa-Pekka-Salonen getting choked up on the podium during Sibelius 2. My short list would go something like this:
Posted by Alex at 10/21/2007 07:29:00 PM 6 comments:

Email ThisBlogThis!Share to TwitterShare to FacebookShare to Pinterest
From the Times' piece about the Gelb "Stars for Covers" program this morning:

In an interview, Mr. Alagna said he had been a cover before and also understood Mr. Melo’s disappointment, but he pointed out that sometimes a lesser-known singer can hurt his career by performing poorly as a fill-in. Mr. Alagna, smiling, then brought up the Gospel story of Jesus’ anointment with expensive perfume, when Judas Iscariot objected that the money should be used for the poor. Jesus replied that the poor would always exist but that he would not always be there.

“You will never have me forever,” Mr. Alagna said. “Better to have me now.”

I mean...damn. What was the deal with the conspiracy against Tchaikovsky's 'other' operas? Listened to a Maid of Orleans production from SFO last year on the radio yesterday and it sounds AMAZING. Looks like the other three post-Onegin works--Cherevicki (an update of an earlier work called 'Vakula the Smith', The Enchantress, and Iolanta (Yolanda?)--are getting some play these days, but recordings are still few and far between. Projects, projects...

In other news, DZ was Joan of Arc in this recording, and besides sounding awesome, also did an intermission interview in which she noted she had added the 'Trud to her rep. Bonus.
Posted by Alex at 10/20/2007 03:05:00 PM 7 comments:

Looks like Pat Racette isn't singing the budderfly which just started. 'Twas hoping to confirm what I already know all the fuss is about. Instead we have one Maria Gavrilova making her debut. So far, so ok. Bit more of a wobble than you want on your fifteen year old or whatever she's supposed to be. But them's are the breaks.

Alagna sounds like he's on better footing than the impromptu Aida the other night--which was certainly very enjoyable even so. Can't quite decide where I fall out on Bobby Love. There's something just undeniably "real-deal" and exciting about the purity of the core sound when its on--that sort of haters-need-not-apply gusto and consistency--which one can't help but fall for. Yet there's also this unpleasant very non-warm piece that kind of goes against what you'd expect from the aforementioned purity of sound. Like a sort of disappointing stale area of an otherwise excellent cookie. On the other hand, it seemed to dissipate with time the other night, so perhaps he just requires some warm-up. Hook it up Peen-ker-tone.

Did the season start already? For serious?

A: DZ is tearin it up
J: this was the first thing I ever saw her in
A: good one
J: do it DZ
A: damn she's good
A: word
A: bobby has warmed up nicely
A: it wasn't awesome at the very beginning
A: there's a bit of a chance I will come to the first Norma
A: I think i will be in NY that weekend, and am tempted to ditch monday so I can go
J: oh awesome
A: http://www.godtube.com/
J: oh dear god
J: http://www.youtube.com/watch?v=EQJD1ura7G4
A: oh I know Planet Unicorn, let me assure you
A: I had that song stuck in my head for like the entire month of August
J: haha
J: it's so great
A: at one point Lindsay turns to me and says "did you just hum 'give it up for Feathers'"?
J: hah
A: i am partial to the america's next top model one
J: yeah that is great
J: the one withe the watercorn is also good
A: yes
A: i wonder if you could get a planet unicorn episode to show up on the front page of GodTube
J: there must be a way
A: this is awfully cute
J: aw
Posted by Alex at 10/17/2007 10:29:00 AM No comments: