Stuff I did week before last: Lulu/Pollini

Sigh...never got around to posting on the fine week of music last week, but for posterity's sake...

I made an executive decision to miss this awesomeness in DC for Lulu at the Met (the first matinee...oh, and I guess my family was there and stuff). And while I am still jonesin' bad for a hit of that sweet sweet Brewer earmagik, I was very happy to "do the deed" and get rid of this nagging Lulu virginity I've been harboring.

It's really just such a fantastic piece of music. While I felt Wozzeck (in the last Met outing) was wonderful musically, the drama feels subsumed by the symphony at times. Lulu on the other hand is all flesh and blood, with Berg's spectacular orchestration supporting moment after moment of pure OPERA.

The cast, as noted, was universally fine. Marlis Petersen sounded great and pulled off the trick I think must be central to an effective Lulu--maintaining that air of amoral cruelty right up until the excruciating pathos demanded by that horrific final scene. JMo towered over his scenes as Schoen and JtR, and Gary Lehman's massive tenor made for a consistently exciting Alwa. Luisi's conducting frequently "made clear" the beauty of Berg's score.

Good sign o' the times moment: in the fourth act, when the "humans are godforsaken animals" theme is extended to a bunch of 19th century financiers at a party screwing each other over on some stock market BS, there were HEARTY laughs from the audience. Choice laff line was something like: "We're bankers, we know what we're doing."


***
Maurizio Pollini was on at the Kennedy Center the following Wednesday, and those who know about that dutifully gathered to participate in the communal brain pleasuring. The program was all Chopin: played, not as wistful memories, but as something approaching modern art in immediacy and formal power. Pollini teases these pieces apart like a surgeon, separating muscle from bone so that one can see how they lie together.

Sometimes his manner can seem a bit cruel with slighter tissue. The simple mechanism of a mazurka in the first half could feel harangued by his probing treatment. But Pollini's interpretations reward those willing to play a deeper listening game--the effect at its best is cumulative rather than acute, an architectural beauty only fully appreciated when the last girder is snapped into place.

Oh, but give the man a substantial subject for dissection--the Sonata No. 3 which dominated the second half of the program was nothing short of transporting. His project--finding truth through the structure, emotional power through clarity, is clearly as vital as ever.

As Downey points out this was a somewhat disjointed program, a mixed bag of Chopin replacing the apparently planned complete Preludes + all Etudes in the second half. But just in case there's any confusion, we will take what we can get.

He closely examines the sources of pieces he plays. Chopin, he pointed out, changed the voicing of the final chords of the Second Ballade four times.

As others have already noted, WNO has turned out an immensely pleasing Figaro revival (I saw it Tuesday with the A-cast). This is a production focused on emphasizing the opera's vast appeal and, watching such a natural, well-conceived staging (kudos to director Harry Silverstein), it is hard to believe this magical piece of musical theatre ever produces anything else. But getting 200 year old humor right is not easy (witness every godforsaken Barber production) and finding a production that avoids wallowing in the endless hit parade while meeting the piece's musical demands is something to value indeed.

The mood was evident from Patrick Fournillier's downbeat on a madcap, rollicking reading of the overture, and he proceeded to keep things moving at a healthy clip, which was clearly catnip to the enthusiastic cast.

Now, it must be said, despite the considerable fun of Teddy Tahu Rhodes' SexyCount TM, it sacrifices something in the plausibility department. There's something to playing the Count as a sort of hapless Don Juan, but the discrepancy between his station and dissolute behavior is an important tension. If he just comes off like a rich 28 year-old d-bag, it is hard to be very perturbed by this. Moreover, it makes sympathy for the Countess less easy to come by--you married this jerkstore who's at least a decade younger than you, what did you expect? That said, Rhodes clearly has a great stage presence and to my ears was the most exciting vocal thing happening onstage. One of the musical thrills of the evening was hearing his warm, resonant baritone cutting through the ensembles.

His Countess, Virginia Tola, turned in a fairly sedate performance relative to her colleagues that at times verged on the nondescript. The voice has an appealing strength and urgency through the middle despite a sometimes unpleasant edge, but peters out at the top, with pitch issues on some of the big moments. But all of that equivocation was promptly forgotten for the duration of her "Dove Sono" which seemed to suck all the air from the room, as it is wont to do in the right hands.

Veronica Cangemi's Susanna was a great deal of fun--she works the Despina angles hard where others might try to keep things straighter and more sympathetic, but it really is a better character this way. Vocally there were some quibbles, including a failure to hold her own in the ensembles where Susanna's soaring lines are so key. But, as with Tola, she went out on a high point, offering a sensitive and beguiling "Deh Vieni".

If less consistent than Rhodes, Michèle Losier's Cherubino was certainly the other vocal standout of the evening, bringing all the ardent passion one wants from this role, if not the exalted levels of mezzo creaminess one finds in the finest readings. The rest of the cast was uniformly strong, particularly: Ildar Abradzakov's polished Figaro and Victoria Livengood's bawdy, hilarious Marcellina, which could be too broad depending on your taste, but never crossed the line to vulgar or distracting.

The crime is not doing Figaro too much, but doing it in a way that anyone could leave bored and unfulfilled. Figaro is like comfort food and haute cuisine all at once--a delicate balance, to be sure, but one that, successfully achieved, leaves one's heart full and one's head swimming. So let's not phone it in, OK? More of what this production has going is a good start.
Posted by Alex at 5/05/2010 10:12:00 AM 1 comment:

A: there is this jenufa in english from the 70s on sirius right now
A: it took me like 15 minutes of listening to realize this
J: oh?
J: I still wish they called the English version "Jennifer"
A: ha~!
A: inflected je-NI-fer
A: ?
J: no, just plain old Jennifer
A: je-NIIIIIII-fer
A: the women are totally unintelligible
A: this is with Astrid Varnay as Kostelnicka
A: creepy...one forgets that Laca is totally just talking about her cheeks the entire end of the first act before he cuts her
J: “Larry"
A: ha
A: and Steve
J: "Steve"
A: Aunt Connie?
J: hah
J: that one doesn't really translate as it's basically like "Deacon"
A: right
J: "Evil Stepmom" is the same number of syllables
A: ha
A: just sung really fast
A: evilstepmom
A: Jon Vickers is a bit much as Steve
A: tho maybe we're just too used to pretty douchey Steves
A: as opposed to scary douchey Steves
A: i want to see a live Makropoulos case
A: how is that going to happen
J: come to SF with me in November
A: oh?
A: oh mattila in san francisco!
A: done
A: i am so there for that
Posted by Alex at 5/04/2010 05:27:00 PM 4 comments:

Jack Quartet at Library of Congress 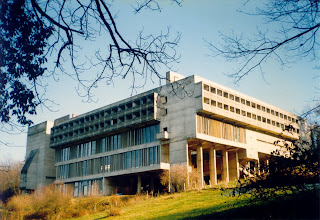 A strong show by the Jack Quartet, a group of Eastman grads specializing in contemporary and new music, at the Library of Congress last night. The program was works by Jeff Myers, Matthias Pintscher, a premiere by Caleb Burhans, and a REDONCULOUS Xenakis quartet.

The opener, Jeff Myer's "Dopamine", operates in a unique space tonally, creating (through tuning I think) these not-quite-dissonant-not-quite-vanilla harmonies that dance uneasily around various solo figures. Toward the end, they converge in great masses of alternative chords and the effect is quite brilliant. You can listen to it on his myspace page here.

Pintscher's "Study IV for 'Treatise on the Veil'" is one of those pieces I find out of place in a regular concert setting. To the unprepared ear (perhaps all ears) it is almost completely without structure. An endless soundscape of demonstrations of the different noises the violin can make, both on its own and with certain augmentations added by the musicians. It could very well be an interesting sound world, but I can't help but feel it might be better explored in the freedom of a gallery space or something similar. In concert, on first hearing, one tries to interrogate it with the concentration one accords other things one hears in that space, and this approach offers pretty meager rewards with such a piece.

After the half, we heard the premiere of a gorgeous piece called "Contritus" by Caleb Burhans. So, sometimes watching new music, I wonder about whether the space exists for something like the generous feeling one finds in, say, Brahms--that kind of unabashed wisdom, feeling for the human condition, what have you. One the one hand, its an essentialized sentiment, and hard to square with a lot of the advances in the "research program", for the best in large measure, but on the other hand--its a question of how well music fulfills some basic human needs.

Burhans' new piece meditates on guilt via three sections organized around prayers of contrition. Not suffocating and terrifying guilt, but, I think, as a sort of beautiful humility before God. The piece is constructed from small figures, multiplying deliberately in pure, vital harmonies. At its climax, the swoon of the strings cuts deep and disarms, resolving in a slow fade out and reverent silence. It is a piece that wants to convey deep emotions, and does, through a deeply persuasive musical logic. I hope to hear it again.

And then there was the Xenakis, specifically the quartet "Tetras". I thought I had heard Xenakis live before, but now I'm doubting that, because I think I'd remember. Here's a little excerpt of him talking about his music out of A. Ross' Rest is Noise:

"The listener must be gripped...and--whether he likes it or not--drawn into the flight path of the sounds, without a special training being necessary. The sensual shock must be just as forceful as when one hears a clap of thunder or looks into a bottomless abyss."

Done and done, buddy. It is indeed primal--but not in the animal sense: in the chemical, rock formation, lava vs. atmosphere sense. It is the performance through humans of deeply unhuman processes. Today, when we think about how to portray such elemental forces, our minds go to a recorded artifact. Imagine the possibilities of technology to create strange, unsettling sound worlds that shock and surprise us. Yet Xenakis has humans doing it, choosing how to create it, in real time, WITH VIOLINS. And bizarrely, I suspect that this is the vehicle which produces the deeper effect of alienation, of disjuncture, of "sensual shock". The act of watching other humans force these noises into the world--and I'm sorry, but the Jack Quartet players just fucking outdid themselves here--resonates more deeply and personally than a disembodied recording.

I dunno if that made any good sense but that's where I am trying to get a handle on what I heard earlier.