Now that I am back in the society of those who have legitimate computers, I feel an mp3 post is warranted. Back when I abandoned the work computer, I spent about 7 hours one night offloading the 20 GBs of music I had accumulated there onto CDs. Unfortunately, that master plan didn't work out so good, as about half are registering as blank. But such is life. Here are some tracks that made it out alive...

"Stille Tranen" (mp3) from Liederkreis, Op. 39, Schumann. For some stupid reason I think I wrote that I was underwhelmed by Matthias Goerne after seeing him live last year. F that. His Schumann is exquisite.

"Standchen" (mp3) from Schwanengesang, Schubert. For some compare n' contrast fun, here's some Schumann from the chairman of the (german lieder singing) board, DFD.

"Cants Magic: Energic" (mp3) and "Prelude No. 1" (mp3) Federico Mompou, Stephen Hough. Some years ago, staying late at work one night, some of Mompou's pieces came on the radio. I was entranced, as was the coworker sitting opposite me, someone with little interest otherwise in the piano repertoire, and we continued to talk about and listen to these from time to time for as long as we worked together. A line from Stephen Hough's notes to this album has always stuck with me: "In the light of Artur Schnabel's quaint yet charming generalization, 'Mozart is a garden; Schubert is a forest--in sunlight and shadow; Beethoven is a mountain range', perhaps Mompou is a window box...Indeed there is always an element of distance in Mompou between subject and objects--the children's games, the singing and dancing are seen and heard from the next street; and his music thrives indoors in the city, not in the sultry southern sun of Moorish Spain."

"Ich sah das Kind an seiner Mutter Brust..." (mp3) from Parsifal, Act II, Wagner. While killing time during a brief stopover in London this summer, I ducked into this CD shop next door to the ENO and came out with this 1954 Parsifal from the Met. Astrid Varnay sings Kundry, with Svet Svanholm in the title role, George London as Amfortas and Hans Hotter as the 'Manz. It's a pretty great recording overall, but what can I say. Varnay kills me. I feel like seeing her Kundry live would have done permanent brain damage.

"Etude No. 11 Op. 8" (mp3) and "Vers La Flamme" (mp3), op. 72, Scriabin, Vladimir Horowitz. This past Christmas I got my mother David Dubal's Conversations with Horowitz book, replete with a CD of Horowitz discussing his life and the piano. It's quite a thing to listen to Horowitz talk about the master composers and interpreters as living breathing artists. It reminds one of what living the tradition of this music really means--a far cry from the extremes of dead culture-bashing and sappy reverence we seem to always come back to these days.

"Come in quest'ora bruna" (mp3) from Simon Boccanegra, Verdi, Victoria De Los Angeles, Opera di Roma, 1958. Yeah, I know people were kind of blah about the Boccanegras this year, and for good reason it seems, but stuff like this makes me wish I'd gotten to see it in the flesh for the first time.

Act II duet between Mazeppa and Maria (mp3) from Mazeppa, Tchaikovsky, Sergei Lefkerus and Galina Gorchakova, Gothenburg Symphony Orchestra, Neeme Jarvi conducts. It is a bummer that Mazeppa, which, despite a controversial production (which was in fact kick ass) was indisputably one of the most exciting new pieces in the house last year, is nowhere to be seen. Remember the awesomeness! Bring it back!

The Devil in Ms. Valery

J: Netrebazonko gala was tonight
J: did you get a computer?
A: not yet
A: how was it?
J: the Mexicano had some cracking
J: but also sounded awesome for most of it
A: cracking...jeez
J: and Trebs sounded and looked way hot
J: yeah I don't know what that was about
J: they camped it up a bit, which was awesome
A: was it packed?
J: like, in the Saint Sulpice scene she grabbed him and started makng out like crazy
A: !
J: it was crazy packed
A: maybe they need to make an opera-porno
J: that would be awesome
J: Man-in
A: Rigol-anal-o
J: hah
A: La Traviata (with fucking)
J: haha
J: La Boheme and Rolando Villazon's Cock
A: now in HD
J: on another note
J: the Met's Tristan looks awesome
A: oh neat
J: here is a picture of Jane Eaglen realizing what her voice sounds like
A: hah
A: "crud"
J: haha
A: PS...
A: great moment in the laundromat the other day
J: yes?
A: "And I'm telling you"
A: came on the radio
J: uh uh
A: and this woman behind me responds "Mmm. Take it."
J: ahhhh!!
A: Lotsa love for Jennifer Hudson down here on the South Side
J: natch
Posted by Alex at 4/04/2007 01:30:00 PM 5 comments:

So, if you live in this country and your home gets electricity, it's pretty unlikely you haven't seen this already, but for those of you who've been in a coma or something since the weekend, I feel compelled to post Alanis Morisette's tremendous take on the reigning frontrunner for worst song of the new millenium: the Black Eyed Peas and Fergie's "My Humps". You can rejoin society by watching it here. My god...I am suddenly so in love with Alanis Morrisette. Please tell me this means she is taking requests now.
Posted by Alex at 4/04/2007 01:22:00 AM 1 comment:

Is anyone else kind of into Torsten Kerl?

The other month I randomly got really into this Tote Stadt DVD he was in a few years back, not putting two and two together that he was to be part of the AeH cast. It seems like the reception has been kind of lukewarm out there...perhaps due to his bailing during the prima or the somewhat unknown quantity of his debut material or just simple lack of enthusiasm. But man...listening to the Helena broadcast the other day I couldn't get enough. I feel like his voice is pretty close to my ideal balance of lusciousness and accuracy in Strauss and Strauss-ish tenor parts. Also, he has this photo montage posted on his web site: 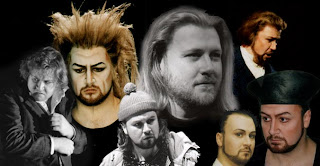