If you've ever spent time trolling the Internet for Mattila content, you've probably come across this 2003 interview. Love this little digression on what she finds interesting in Slavic characters, esp. in light of her triumph as Emilia Marty:

CV: You have sung to universal praises a lot of strong and interesting female roles from Slavic operas.

KM: Pardon me for interrupting, but Slavic female characters are weak as well as strong. They are simultaneously weak and strong. What I admire in them is that their strengths and weaknesses can be so openly performed and conveyed and needn’t be hidden or covered by a veil of simplicity, innocence and purity. They do not act as others expect them to. Everybody is able to create decent characters which are extremely boring from a performer’s point of view. It is difficult to create true characters and what I admire in Slavic female roles is the truthfulness of their strengths and weaknesses. There are also various open endings which the audience must sort out when they return home from the opera house, such as in Jenufa. I enjoy this unfinished quality in movies and theatre plays too.

Finally getting around to saying a word about the last performance of SFO's splendid Vec Makropulos, as my extended "telework" Thanksgiving has resulted in a lot of karmic retribution in the form of office work (which is surely the cruelest karmic retribution of all). 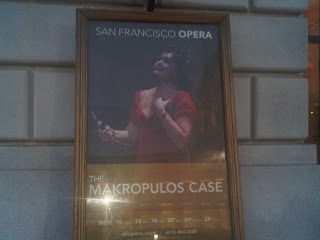 But first a very special thanks to the SF blogger contingent I got to meet before the show (in attendance were the respective authors of Reverberate Hills, the Standing Room, and Civic Center), all on account of Lisa Hirsch's hosting skillz. Meeting, in person, those regular civilians who have wowed and touched you over the years with their prose is a particularly enjoyable and special phenomenon of the Blogging Period of the Internet Era, I think.

And speaking of special phenomena...

So, until I heard it was happening, the idea of Mattila doing Emilia Marty hadn't really crossed my mind for some reason. My only reference was the Anja Silja DVD, and that kind of thing doesn't really inspire daydreaming about who else would be good in something.

I think I've read this in every review, but it is such a visceral impression for those who like their Mattila that it bears repeating: this part is an obscenely good fit for her talents. The unifying motives of innocence and penance found in the damaged ingenues of Jenufa and Ka'ta are absent here. Half the time, Marty doesn't know why the fuck she does what she does. After 300 years, she is a clutter of emotions and impulses, a junkyard of wants and reactions. Mattila owns this madness, bringing all the gross schizo stuff celebrated in her Salome to bear on the Second Act sequences. Yeah, and the whole thing is done in this ridiculous harlequin outfit and skullcap. Please future productions, never let her do this in a cocktail dress.

But Mattila's great advantage lies in the number of ways she has of unifying characterization and voice, the number of ways she has of being on the stage. After watching Marty flail against the world, her remarkable turn in the third act, to reject further life, is simple, modest, and radiant. It doesn't hurt either that we get one of the most glorious unbroken stretch of Janacekian lyricism to be found in any of his works, which just happens to lie in the sweet spot of her voice.

It's exciting to think how much more she might grow into the role between now and the New York shows. The chatty first act material is not yet quite natural, I think, and polishing things like this will round out what is already a bona fide triumph.

Great accolades should go to SFO (and the Finnish National Opera) for mounting such a strong production around her. The singing and acting throughout the rest of the cast was very solid, though there was a lot of variation in ability to cut through the full-throated level maintained by the orchestra through many of the chaotic group scenes. Miro Dvorsky made a passionate case for the great Janacek tenor role of Gregor, though I would like to hear someone in the mode of a warmer-voiced Steva type in the part. Gerd Grochowski also stood out as a commanding Prus.

The production is a handsome black and white number with good functional solutions for the three settings, especially the first act law office. As mentioned above, Mattila's costuming is genius--when not in the harlequin getup, she looks normal amazing, particularly the evening gown in the last act.

Finally, we must note the great playing in the pit under Jiri Belohlavek, the same man who made Mattila's last Jenufa run so memorable. Precision of texture, lusty momentum, and great emotional pathos were all delivered as hoped.
Posted by Alex at 12/02/2010 11:16:00 AM 3 comments: