Had the novel experience of falling close to, if not slightly above, the median age of a Strathmore audience last Thursday, on the occasion of an all-Steve Reich program performed by the venerable Bang on a Can All Stars. 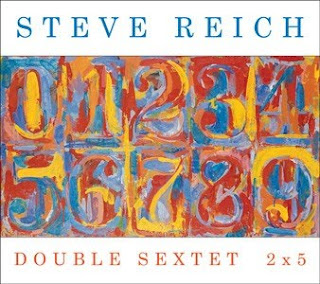 I was in the penalty box for the first selection, Music for Pieces of Wood, which was lame (not the piece, but my missing of it -- and even moreso because it turned out I had my pick of seats in the basically empty sides of the promenade level). The first half was rounded out by the wonderful "New York Counterpoint" for solo clarinet and prerecorded tracks by the soloist. Then the premeire - 2x5 - an appealing piece for rock quintet plus prerecorded tracks. Sounding like a sort of jam session with obsessive compulsive disorder, Reich offers many unexpected and fascinating textures here, from the slow movements hypnotic, bell like electric guitar plucks, to the good times California flavors that emerge and recede through the finale. The amplification had some issues though--the mic'd piano sounded nasty.

The introduction to the electric guitar's less familiar but perhaps more appealing possibilities continued after the half in Reich's "Electric Counterpoint", also for solo instrument and prerecorded tracks--the neat sonic bursts of the guitar bouncing lithely across a crackling landscape. The closer was the well-knownish Double Sextet, which presented the richest, most intricate writing of the evening. I wish I could hear this piece with the full live band, however--while the prerecorded elements of the other works added information and depth, here it seemed to muddy and detract from the more delicate textures of the standard ensemble.
Posted by Alex at 11/16/2010 01:05:00 PM