Opera at the movies: Aida from La Scala

Caught that 2008 Zefferelli Aida w/ Bobby, Violeta Urmana, and like 10,000 other people at the West End Cinema here last night. It's on DVD here.
This is a sumptuously sung production. Urmana's virtues are well known, but the beauty of her voice here manages to awe nonetheless, demonstrating a creaminess that just don't quit. Unfortunately, her Aida is a tad whiny. Not that I don't want pathos, but when she starts to be a BUMMER I'm out. As for Bobby, I think we should all just agree that for whatever reasons "Celeste Aida" brings out the worst in his voice and that it doesn't matter because that is not really a great song anyway and everything that comes after is pretty spectacular. The shadow of that uncontrolled pingless hooty sound may lurk, but in stretches of riveting, unflagging passion like his 3rd and 4th Act scenes here it is all but forgotten. Ildiko Komlosi, who I don't know at all, offered a womanly, regal Amneris, and a great Act IV monologue and scene with Radames did some preemptive thunder stealing from the death scene.
The production is the Zefferelli joint that opened the 2008 season and it is some good red meat spectacular for the most part. But you know, there IS a line between opulent and busy, and this time out you find yourself somewhat desperately looking for the casino exit about 10 minutes before the end of Act II. I don't object to the shininess of the sets, though things do get a tad claustrophobic at times. The really berserker part is that Zeff decides to hang these metallic horizontal bars to frame the whole set, because, apparently, the absence of sparkly shit in the 40 feet above people's heads could not be allowed to stand. 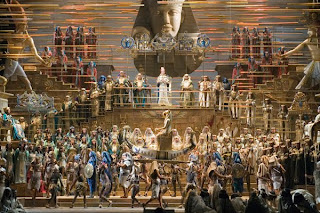 The big dance numbers are...labor-intensive, but kind of a drag on video. This being Italy, they go all in for the black face, which is neither here nor there for the most part, but starts getting a bit absurd in the big Act II showpiece featuring legions of "Africans" in complicated masks and bodysuits. It looks a little something like this: 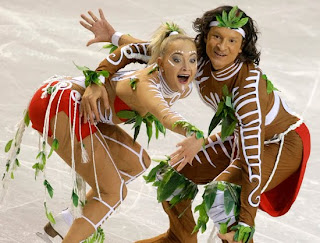 But then! Amidst all the mildly racist dullness, Roberto Bolle appears--no bodysuits need apply--and the next 10 minutes become the Roberto Bolle's rockin' bod show, ultimately scoring him bigger applause than any of the lumpy ol' singers: 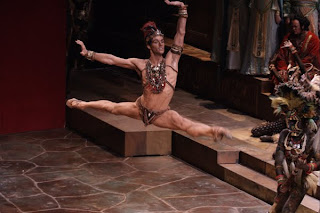 The overall video production is superb quality, though as many have mentioned, there are a lot of "artistic" moments cut in of flowing drapery and soft focus closeups of all the fake-ass golden Phthah tchotchkes. I don't object to these shots when used judiciously, but it often gets ridiculous, as during the final scene, when the camera can't keep its attention focused on the oh so boring shadowy tomb set for more than 10 seconds at a time without switching to some supernumerary's gold lame arm netting. That annoying tic aside, however, the camera work offers a nice balance of closeups and full-stage views so you can soak in/OD on the magic.
Posted by Alex at 2/28/2011 11:21:00 PM

After I saw this production via an HD showing for which I did the intro and commentary, I featured Roberto Bolle on my blog, especially a spectacular photo of him totally naked, shot 3/4 rear (by then I'd documented that he wears as little as possible when dancing, no matter what the role).

For the next year and a half, probably one third of the hits on the blog were from people searching for pictures of Roberto.

Heh...once you find out about Bolle and get that sneaking suspicion that you may very well have found the most perfect human specimen alive, you're kind of obligated to google him incessantly.

What did you think about the rest of it?

It was the usual Zeffirelli clutter of too many tchotchkes and the directing was mostly traffic management.

Violetta Urmana was distinctly OK. I find her voice a bit earthbound and Aida needs the ethereal in the mix. Her sound may have been smoother in the acoustic of the big house rather than the closely microphoned sound of the DVD. I liked Ildiko Komlosi very much. She seemed to care about the character as much as the voice. Alagna was not at his best and not in the kind of form he's been in this season at the MET. The less strenuous moments are pretty good.

Carlo Guelphi was a major disappointment because I've heard him in the past in Opera Orchestra of New York performances where he sounded great. He's dry, wobbly, strained here.

I hated the camera work, self-consciously "arty" and distracting and the kiss of death on top of Zeffirelli's narcissistic window dressing. And that's a shame because he used to be an artist.

Hi alex, will and any one else in th eether. Your comments are perceptive. Were you ever perchance, a music student in Rochester NY, who played classic Ave Maria on a chromatic ocarina for end of year presentation? About 25 years ago I spontaneously gave a delightfully talented young man (Alex?)such an instrument, and am curious if he still makes music with it. I spent several years in the 70's, hitching round the globe (making ocarinas), and now I'm a School Social Worker and music instrument maker in Whyalla South Australia. I may not return to this site soon however i am on FaceBook as Bella Bishop. Good luck with your endeavours and keep up the interesting work. Best wishes - Bella.