Louis Lortie plays Liszt at the Library of Congress 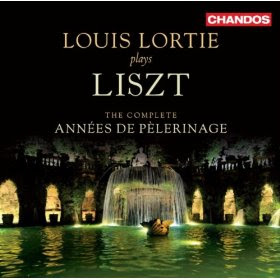 I suppose I don't attend the right conferences, but I'd be interested in a panel session titled "Did it Make a Difference? Taking Stock of the Liszt Bicentenary," in which key, um, Liszt stakeholders take a candid look at how well the jubilee year of programming has succeeded in its oft-repeated objectives of broadening the repertoire in circulation and mitigating the impression of Liszt's music as mostly impressive but vacuous showpieces.
I imagine a number of those panelists would take a pessimistic view. Sure, some high profile champions (see Hough especially) have been making the case as part of the festivities, but the general narrative in the media must still feel disturbingly noncommittal for the Liszt partisan, along the lines of "Liszt: Shallow Showman or Something More? Eh." The birthday weekend coverage alone sounds pretty discouraging. A. Ross calls the main Times story by Kenneth Hamilton, a "fine, if unsentimental appreciation" but by classical music standards, this kind of merciless even-handedness comes off like a hit piece. Over at NPR, the b-day headline registers as that cruelest of backhanded compliments--nice guy, but the music doesn't have much going for it (as called out by Ionarts).
If the concern is the taste of the general classical audience, these measured, musicologically-minded assessments just aren't going to cut it. What is needed are some new narratives about Liszt that modern audiences can grasp and appreciate. Understanding Liszt as "proto-modernist" is certainly a fascinating current that has surfaced throughout the year (see Pierre Laurent-Aimard's excellent DC recital last spring), though the appeal here may be limited. But Louis Lortie's engrossing show at the Library of Congress this past Wednesday demonstrated he is onto something very different...
Lortie presented Years 2&3 of the Années de Pèlerinage (he has just released a recording of the complete cycle). He gets that this music turns upon a deep, intimate connection between performer and audience--that, to a degree far greater than the other great Romantics, much of Liszt is not fully formed until it is communicated by the artist. This quality might make Liszt's genius harder to grasp in a midi file, but in the right hands, it can make for a magical performance.
In the opening works of the Deuxieme Années (Italie), Lortie seemed to discover each color in the Sposalizio, meandering through its varied facets almost as if playing jazz. The gently martial dance of the "Canzonetta del Salvator Rosa" and the wistful "Sonetto 47 del Petrarca" appeared like childhood songs suddenly and imperfectly recalled.
The second half brought the entirety of the Troisieme Année. This is Liszt descending into the abyss, with brief moments of shimmering respite ("Les Jeux D'eau"). Despite the frequently transgressive harmonic language, that element of deeply personal connection remained. Doing justice to works as black as the "Marche Funebre" and the two "Threnodies" requires an unflagging emotional investment, but Lortie pursued them faithfully.
Recording this music is difficult. I've been listening to Lortie's disc for the last few days and while enjoyable, the discrepancy between concert and artifact is significant. Indeed, this may be one of Liszt's challenges in 2011--the inventor of the modern virtuoso recital naturally created works that live most intensely when they are experienced live in the hands of someone with rare dominion over the piano.
* * *
See Charles Downey's review of the Lortie recital. Also note the satisfying takedown of that Times article from Lisa Hirsch--audiences and critics can obviously have differences of taste about great composers of the past (i.e. Rossini blows) but trying to adjudicate whether or not someone whose music has been consistently played all over the world for the past century plus has a worthwhile musical legacy is an absurd bit of overzealous even-handedness. You don't need to be make it a puff piece, but you do need to report that the vast majority of great concert pianists of the past and present have demonstrated they think this question of whether there's "any good" in Liszt's output is moot.
Posted by Alex at 10/20/2011 09:00:00 PM