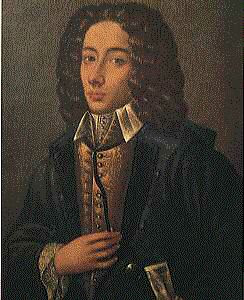 A very engaging take on the Pergolesi Stabat Mater from Washington Bach Consort this afternoon (the composer's second most famous work, I believe). J. Reilly Lewis' ensemble captured the driving energy that characterizes many of the work's movements with great verve and precision as well as the often overwhelming beauty that belies the modest forces required. Its easy to see why this is Pergolesi's masterpiece--there is a rich variety to the movements and the emotional communication is immediate and powerful. Also, for those who like their Italian baroque full of decadent, unbearable tension (and who doesn't), it's like suspension city up in this b***h.
Soprano Agnes Zsigovics, performing in both the Stabat Mater and a setting of Vergungte Ruh by Christoph Graupner (a contemporary of Bach) combined a warm, ringing sound with an unwillingness to hold back the kind of firepower sometimes missed in this music. Countertenor Daniel Taylor delivered some beautiful sounds in the upper part of his register and acquitted himself well in the Stabat Mater, but a setting of the same Vergungte Ruh by J.S. Bach was less successful. With the caveat that the countertenor voice is a mysterious thing about which I would not feign understanding, Taylor frequently sounded poorly supported here, resulting in some choppy phrasing and a weak, often inaudible lower register. Indeed, the Bach in general was a bit of a snoozefest.
Scott Detra, organist for the Washington National Cathedral, rounded out the program with a thrilling reading of Bach's Fantasia and Fugue in G Minor (BWV 542).
Posted by Alex at 11/06/2011 11:30:00 PM

louboutin shoes is one of the most recognized name brands in the world of high fashion.