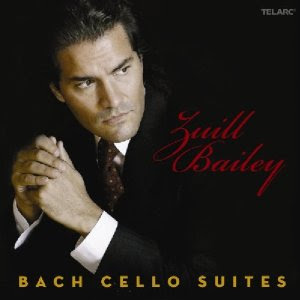 Zuill Bailey did the cellist's Iron Man yesterday at Strathmore--a back-to-back performance of all six of the Bach unaccompanied cello suites. His disc of the suites is here.
It's no mystery why people don't run this gauntlet in public more often. After a decade of preparation, a recording under his belt, and a lifetime of performing the suites like any cellist, a live performance is still riddled with dicey moments well outside the realm of "respectable" CD-smooth sound audiences are at least thought to demand. In short, it's a beast, and a very different experience from all those laboratory-created performances swimming around one's head.
Yet thank goodness we have brave souls willing to do it, as it is a very special thing indeed to hear them live. A cherished performance memory for me will always be sitting in the front row at a Bargemusic concert during a frigid winter in what must have been 2001 or 2002 for a performance of the fifth suite by Fred Sherry. Watching Sherry bear-wrestle his cello to the ground to extract this remarkable music was a visceral experience, not soon forgotten.
A traversal of all six in a large venue like the main Strathmore hall is bound to be less captivating, of course. There are some basic endurance issues that give a concert like Bailey's more of a congenial exhibition flavor than a full-throated reading. (Bailey wisely embraced the not-quite-a-normal-recital circumstances by adding a generous helping of charming anecdotes and his own thoughts about the suites throughout.) And of course, this is music of a surpassingly intimate character that is ill-suited to a full-sized concert hall. The atmosphere for yesterday's show was also not helped by a Strathmore sponsor who decided 120 minutes of solo baroque cello music was a clear winner for families and offered free tickets to kids, leading to constant disruptions throughout by bored-out-of-their-minds children.
But all that aside, there were many things to love about the afternoon. Bailey uses his instrument, a 1693 Gofriller cello originally designed to serve more of a bass role in baroque orchestras, to stunning effect, opening up the range of these pieces with a rich, booming lower register (find an excerpt from the CD and check it out). The uptempo dances are earthy, rhythmic, and at times downright raw, reflecting Bailey's interest in emphasizing the forms that inspire the different movements over a more abstract approach. Beauty of tone is surely sacrificed in some places, but this approach frequently pays dividends in exciting, kinetic interpretations. He contrasts these with leisurely, almost indulgent, readings of the slower movements, for instance a stately, intimate Sarabande from the 4th suite and a spectral, haunting Sarabande in the 5th. Special commendation, too, for Bailey's lovely and simple take on the first suite, a carefree reading that brought new interest to these well-trod pieces. He offered the prelude to No. 1 again as his only encore, inviting the audience to reflect on the remarkable journey these pieces represent.
Posted by Alex at 1/08/2012 04:05:00 PM

Not surprised he'd have an alternate interpretation of the six Bachs -- he is, after all, the classical cellist who appeared in Oz as a prisoner who killed a man by ramming the spike of his cello into him!

I don't think Pablo Casals did anything like that. :-)

Ha! I assume that was a stunt cello, and not the Gofriller...