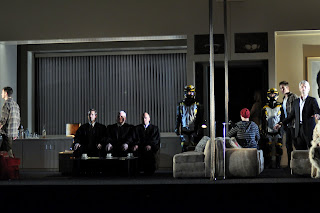 The chauffeur and the poet journey to the underworld, and watch as Cégeste is questioned by a panel of judges. (Photo by David A. Beloff)
Listen up DMV people who have bemoaned the less-than-imaginative WNO season this year--the Virginia Opera deserves some love. For just one more show Sunday afternoon, they are offering a very worthwhile production of Phillip Glass' captivating 1993 opera Orphee (originally from Glimmerglass) that may very well be the finest example of 20th century opera one is going to see in the region this season.
Orphee is essentially a musicalization (operatization?) of Jean Cocteau's 1949 film Orfee, an updating and interrogation of sorts of the Orpheus myth. Here, Orpheus' great love is not Euridyce, but death itself, as embodied in the mysterious character of the Princess. Death is in love with Orpheus as well, and sends Euridyce to Hades in order to be with him. Orpheus journeys there to retrieve her, but that fateful glance that dooms Euridyce to the underworld comes after she and Orpheus are back at home and forced to hide from each other in their small apartment. Rather than a moment of faithlessness, he looks at her and returns her to the underworld because "it was bound to happen sooner or later". Having finally gotten Orpheus back, however, the Princess sacrifices herself to ensure the poets immortality, sending him back to live out his life with Euridyce. (And if that doesn't make sense...well, you should probably just see it.)
While all of Glass' telltale markers are in place, this is a vastly different challenge than his recently heard Satyagraha. In the use of repeated figures to build tension and guide understanding of a complicated plot and the expert setting of dense, conversational text, one is inclined to think more of Poulenc. The dizzying first Act, which spins around the mystery of the Princess with disorienting clues and portents, burbles along with a jazz inflected sound reminiscent of the film's setting. Yet the real accomplishment is the second act, where Glass highlights the great tragic romance between Orpheus and the Princess/Death character in a series of compelling scenes.
VA Opera fielded a fine cast, particularly the rich Orphee of Matthew Worth, Sara Jakubiak's ringing Eurydice, and Jonathan Blalock's Cegeste. While I initially felt strongly that Heather Buck's Princesse sounded not-quite-right for Glass, she turned out to be perhaps the production's greatest asset, realizing the Princess' material with thrilling intensity. Jeffrey Lentz' served the part of Heurtebise well dramatically, but vocally did not quite match his colleagues in this music. Steven Jarfi conducted the score with great passion and momentum, never allowing the repetition to become static.
The whole thing is expertly staged by Sam Helfrich, who plays on the mirror motif (the passage between the living world and the underworld in the film) with supernumeraries playing "mirror images" of the principles engaging in an intricate choreography as the action shifts between spaces. A handsome modern apartment set replete with various "mirrored" spaces is skillfully lit to delineate different locations.
Much credit is due to VA Opera for making this production happen. While this would surely be a hot ticket in some locales, in Fairfax the company has been rewarded with a lot of empty seats and intermission snark. This is a piece that desperately deserves a broader audience and should be able to get one (nothing so intolerably transgressive about tonality and greek mythology is there?). But, as Charles Downey points out, its a piece of theatre that needs to be produced to be appreciated. Companies like this to take the plunge.
Update: Here's Anne Midgette's review.
Posted by Alex at 2/11/2012 12:28:00 AM

Would love to have revisited this opera. I saw it in possibly the original production in the early '90s at American Repertory Theater in Cambridge, and wasn't enthusiastic. Back then I was more of a Glass "purist" and was skeptical of his rendering of actual narrative (and the hint o' Poulenc sounded odd to me), but I've come around in that regard. And, yes, Heather Buck can be quite something. We've heard her every so often in Boston over the past decade, most memorably as the Maid in Ades' "Powder Her Face."

I also saw the Zambello production at the ART and liked the opera but the Glimmerglass production with Lisa Saffer as the Princess was a revelation. Sam can be inconsistent as most directors are here and there but this one was a flawless job. I was literally awed by some of his choices and the simplicity with which they were carried out. Not that there's much of a NYCO any more, but I do wish they would present it in New York -- it's a great piece of work.

Yes! That would be such a hit in NY after the reception Satyagraha received...

Absolutely, but I think the MET is too big for Orphee. On the other hand Akhenaten, which I have seen in two separate productions in Boston, would work well in the MET. It's a beautiful work on several levels and I'd love to see it get the kind national exposure a MET production brings these days.