Turandot at the Met 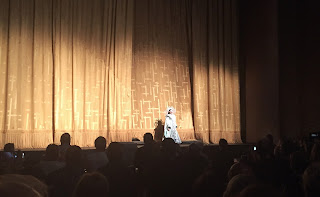 Zerbinetta makes a pretty good case for adding Franco Zefferelli's Turandot production to the list of petty crimes against humanity (say, above Tevas and socks but after the first Transformers movie). And while she's not wrong, it's also important to note that this production is a totally gonzo yet honest version of the opera Puccini and librettists Adami and Simoni created, imbued with all the cross-cultural thoughtfulness 1924 had to offer.

Now that we're all on the same page, here's what I don't want to see when the Met someday takes this production to a field far away from flammable structures and burns it down: some neutral, de-contextualized Turandot that tries to boil it down to the "timeless human story" at its core. I will accept Turandots that try to deconstruct the snot out of the material, and I will accept Turandots that swim around in a 1920s fever dream of the Orient like Scrooge McDuck in his money pit. But I will not accept a Turandot that tries to divorce the material from its cultural trappings.

Look, this isn't some hard and fast decision rule for all Europeans clumsily dramatizing other cultures. Something like Butterfly has its problematic material that any director needs to confront when producing it 100 years later, but there really is a winning argument to be made about why its characters are timeless human portraits that transcend their context. Our appreciation for Turandot comes in spite of the fact that it would be easy dustbin of history material if not for its very considerable musical interest. Modern productions shouldn't get to punt on that. 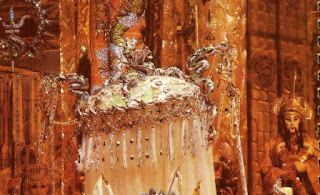 So, the big draw of this first Turandot tranche (the complete run is being shared with Stemme and Lindstrom as well, plus a bonus Jennifer Wilson evening), was a role debut for our beloved Christine Goerke, following up on her celebrated Dyer's Wives at the Met two years ago and subsequent triumphs in Wagner and Strauss in various North American locales. After a little warm-up cautiousness, Goerke hit her stride and that unique, softly rounded sound poured forth, making for a stunningly warm and musical reading of a part that naturally leans to the strident and brittle. The vocal awe her Turandot inspires owes less to shock and more to how she is able to use that full voice and incredible stamina to keep the musical momentum alive. If there's a tradeoff, it's that she doesn't quite have that terrifying top most people prioritize in their Turandots. Her high note approaches were tentative at times, the results tended to decrease in volume, and felt a bit strained relative to the freedom that characterized the rest of her range. Goerke's second Act scene was suitably authoritative but her third Act capitulation to Calaf's advances was the most compelling, a welcome little touch of humanity amidst all the frantic shenanigans filling the stage. That exchange, sort of a trashy version of the end of Siegfried where you don't care what happens to anyone, got me thinking about sneaking to Houston for an early look at her Brunnhilde #2.

Marcelo Alvarez is one of those singers that gives one a feeling of solidarity; almost of continuity with the past--say, 1985. One likes to imagine walking into some stodgy, big ol' Met revival of a warhorse on any given Wednesday in the 80s of yore and hearing the kind of big, crowd pleasing singing that is a maybe a bit less distinctive than the guys at the top but undeniably satisfying. Yeah, Alvarez' Calaf is basically always shouting and churns out his music in little overexcited phrases, but damn its a great sound, and listening to that big voice tumble through the throngs of chorus and orchestra over and over again just doesn't get old.

Russian soprano Hibla Gerzmava was a powerful, passionate Liu, though I'm afraid Liu probably gets the shortest shrift of any character in this production, drama wise. James Morris is still kicking it, bringing some extra polish and pathos to Timur here with his patented Dadsing techniques. Great work as well from the Ping/Pang/Pong trio.

Finally, Paolo Carignani presided over a reading in the pit that exemplified the best kind of controlled chaos possible with that big unruly band. He may have benefited a bit in comparison with the shaggy Carmen last weekend, but his chops and sheer "rightness" of his feel for the music shone through in chorus after challenging chorus whipped into a precise frenzy.
Posted by Alex at 9/26/2015 03:07:00 AM