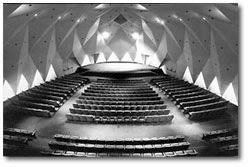 In general, I don't have a ton of interesting things to say about string quartet performances, but feel I should at least give a shout out to the very nice program of Haydn, Bruckner, and Schumann given by the Fine Arts Quartet at the National Academy of Sciences yesterday afternoon.

First things first--have you even been to this auditorium (left)?? I don't have the best ear for acoustics--I notice when they are bad, but above a certain level in a modern concert space I can't really distinguish the good from the great. That said, the acoustics in this auditorium in the main NAS building off the mall are freaking phenomenal. There's a detailed explanation of the technique used here. We were about 100 feet back from the stage, and the sound of the string instruments was absurdly present and warm, as though you were sitting next to the instrument, and yet it was coming from all around you. Really, the acoustics were entertainment enough--it's honestly the best room I've ever been in for chamber music. Unfortunately, looks like they only do three public shows a year.

Anyhow, I won't dwell on the program too much. The interesting Brucker quartet on the program, only discovered in 1949 from the program notes, had some really lovely moments despite my general (though largely unjustified) indifference to Bruckner. The Schumann Op. 41 No. 1 which made up the second half of the program was very beautiful, particularly the adagio with its aching viola line played movingly by the Quartet's newest member. The encore was an invigorating rendition of the last movement of Shostakovich's 1st string quartet, which kind of left one hungry for what the group can do with 20th century fare.

UPDATE: Sophia Vastek (who felt the afternoon left quite a bit to be desired) points out at Ionarts that the concert page for NAS linked above has the remaining performances in their season taking place at the National Gallery instead of that magical auditorium. WTF NAS?

PS, here's that priddy Adagio from the Schumann:

Hey, you boys are back! It's been a long time since last May--for those of us who like to read you, you really should think about attending some summer performances! :-)

Great review of the Gotterdammerung in DC.--many thanks.

The one time I saw some real humor in Gotterdammerung was at Bayreuth in 1995, the production designed by the contemporary artist Rosalie and the director was Alfred Kirschner. He presented Siegfried as a big, strapping teen full of random energy and enthusiasm, running fast through the world in search of adventure.

In this production the Gibichungs were very high style and had high thrones that were designed to extend their costumes so they looked like huge icons of themselves--very image-conscious and publicity driven. When Hagen announced Siegfried's approach, they all ran for their thrones and struck faux-imposing poses. Siegfried shot into the hall so fast that he was out the other side and off stage before he had time to stop. the three of them came down off the thrones with WTF? expressions but saw him coming back to investigate, immediately ran for the thrones and resumed their poses. Very funny, and also very right for the situation I thought.

Heh...that production sounds great. I suppose the nice thing about Gotterdammerung is that you can go for some humor knowing that it won't affect the tone of the conclusion, since the audience has several hours to get over it. And really, you have to be a robot to play the Gibichung business entirely seriously...

On the subject of Ring humor, I always remember this interesting but all over the place Stuttgart Ring on DVD (http://www.arkivmusic.com/classical/album.jsp?album_id=91028&album_group=2) where the Siegfried spends all of Siegfried in a poorly scrawled t-shirt that says "Siegfried". I mean, that kind of says it all, right?