Musicians from Marlboro at the Freer Gallery 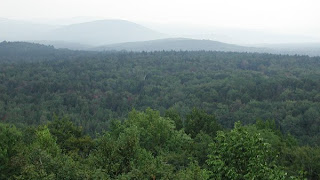 The Mozart that opened the program was a bit of a revelation for one who A) is used to being underwhelmed by Mozart chamber music in concert and B) hates the flute. This was not your standard pretty-melodies-layered-over-the-metronome-beat Mozart playing. There was a great sense of tempo, far more malleable and alive than one expects in this music. Moreover, there was something in the sound that felt entirely "classical"--while unmistakably more evolved than say, Telemann, there wasn't a hint of overweening romantic excess for the sake of excess. All in all, a really unique and committed reading.

The following trio of 20th century works was the heart of the evening. The first, "Mirrors" by Kaija Saariaho, was the furthest afield, featuring the decidedly creepy effect of flautist Joshua Smith whispering phrases in French over the half wuffled half played flute line. But there's no denying the foggy, tortured combination of flute and cello textures was compelling. The second piece, by Toru Takemitsu, most evoked the Debussy reference Smith made in his introduction to the three pieces, pairing a sensuous, damaged viola solo over neat jazzy chords in the piano.

And then to close the circle, violinist Soovin Kim played the Louange de l'Immortalite de Jesus from Messaien's Quartet for the End of Time, which was, to use a word, transcendent. I don't really know how violins work, but Soovin was able to coax this remarkable, immaculately pure sound from his instrument, extremely fine and with virtually no vibrato. That sound, modified only ever so slightly to be more expressive as the violin's line develops further, was the perfect vehicle for the pure white light of Messaien's work. The audience was ecstatic.

I was less enamored of the Brahms which made up the second half. Brahms seems to me most alive when played as great prose--this was more like abstract art, or perhaps an action movie. They seemed desperate to find something viscerally thrilling in the quartet rather than letting it speak for itself. The dynamics were too extreme, and the momentum of the piece nearly ground to a halt between sections, forfeiting the great structural forces which make Brahms so rewarding. Mind you, the violent dynamics weren't savage--everything sounded very wonderful, it just failed to add up to much of a coherent whole. The exception was the gentle Andante, which would tolerate none of the agenda imposed on the other movements and was quite exquisite.
Posted by Alex at 11/14/2009 02:03:00 AM

Are you paying over $5 per pack of cigarettes? I buy high quality cigs over at Duty Free Depot and I save over 50%.