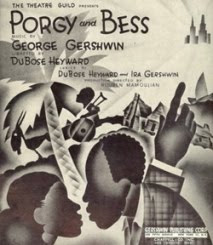 Others have suggested that what's really going on here is Paulus/Parks' attempting to be diplomatic about while softening "Porgy's" undeniably racist trappings for a modern audience. But why not just have that conversation outright instead of criticizing the quality of the work? If "Porgy" has more merit than other racist works of the period that have been justifiably consigned to the dustbin, that should be apparent in a good production. If it doesn't have merit beyond the catchy songs, then do a production that questions and interrogates that content (or do a highlights CD). What's not OK is sending the original material, with all its complexities, down the memory hole, and assuming that you can pass off something more palatable as the original.
Posted by Alex at 8/14/2011 02:36:00 PM

The timeless design, simple and high quality style become an important and enduring element of Ray Ban through the nearly 70 years.Ray Ban Sunglasses Ray Ban RB3217 Gunmetal Grey Lens Active Lifestyle Sunglasses Ray Ban UK offer a classical yet vague design. Setting the standard for excellence, Ray-Ban consistently combines great styling with exceptional quality, performance, and comfort. Ray Bans Sunglasses, which can not only take good care of your eyes and face, but also give a fashion looking outside.

Featured by its unique style and uncomparable quality, Ray Ban has now become one masterpiece and the bestsellers of Sunglasses in the world. Ray Ban RB3025 Black Frame Transparent Lens Aviator Sunglasses Ray Ban UK will make you enjoy the stylish life style; put on the Ray Ban Sunglasses, you will be the top fashion man and kept away from the Ultraviolet ray. Design of this collection has been schemed out to provide comfort even if you constantly move and have a high tempo of your lifestyle.Ray Ban The Ray Ban sunglasses has the Ray-Ban signature logo on the lens and are prescription-friendly. The well-liked of Ray Ban Sunglasses mainly because the idea is actually,plenty involving people this kind of brand name is actually generally a new one particular.