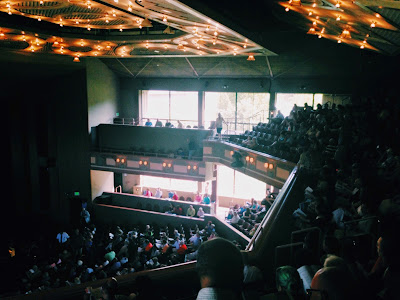 To recap: An American Tragedy premiered back at the Met back in 2005 as the opera world was still reeling from Carl Sagan's Romeo and Juliet. A Volpe-era commission from composer Tobias Picker and librettist Gene Scheer, the Met gave it an impressive launch, with a big Broadway style production (directed by Zambello), and an aughties all-star cast of American singers: Nathan Gunn (in the bathing suit that launched a thousand Arts & Leisure puff pieces), Pat Racette, Susan Graham, and Dolora Zajick. I was into it.

Cut to 9 years later: Zambello has brought a streamlined version of the piece back to Glimmerglass for a welcome second hearing with a strong cast of young singers. On the plus side--there's still a lot of engaging material here, even without the splash of the first production. On the other hand, the limitations are clearer this time around--and perhaps insurmountable in the long run.

The great promise of "AmTrag" is Picker's music. Not sure what label you would put on it--perhaps something like "lyrical minimalism"?--but in any event it does a great job of depicting the dread-filled emotional landscape of the story, while maintaining the capacity for displays of great emotional power by the principals, for instance, Roberta's scorching material in the end of Act I ("Marry me Clyde Marry me Clyde Marry me Clyyyyyyyde"). Set pieces like the church scene, in which Roberta's effort to publicly confront Clyde is woven in with the congregation's hymn, and Clyde's mother's gripping aria that carries the finale further demonstrate Picker's skill. Yet while I was again pleasantly taken with the depth of the music, its hard to ignore that the troubles of the libretto.

It's just all so relentlessly...literal. The cinematic/epic Broadway-style approach to the story spawns an endless procession of discrete little scenes that dutifully spin out the plot, but nothing really happens during any of them. The major revision in this version, the removal of a series of opening expository scenes with a childhood Clyde, seems to be trying to compensate a bit for concerns that the show doles out a lot of plot at the expense of drama, but I fear it's not enough.

The big showpiece arias in the first Act--Clyde's thing about fast cars and Sondra's "New York has Changed Me"--are prime examples of how poor a job this libretto does at finding dramatic incident worthy of the kind thoughtful melodrama Picker/Scheer seem to want to write. Both fall flat, unable to gin up much interest with material that does little to give us more insight into the characters than we've already gathered. If Scheer allowed Clyde a moment to wear his heart a bit more on his sleeve, perhaps reveal to the audience a bit more about his sociopathic lust for ambition that will lead to his later amoral acts, we might be engaged, but instead we get seven minutes of the non-surprising information that this social climber thinks nice cars are good. One emotional punch that did land cleanly was Roberta's heartbreaking material at the beginning of Act II, when she grows increasingly distraught that she has been abandoned by Clyde. Her text here is done as though she is reading letters she has written to Clyde, and in part I think it works better because of the easier marriage between emotional content and declaration that Scheer allows himself for this conceit.

The production, directed by Peter Kazaras, is spare and effective (clearly they blew their wad on that big light up barn map of NY state for Ariadne), though the spartan approach on some things, like the drowning scene, made one fondly remember the clever big budget version from the Met. The three main principles, Christian Bowers (Clyde), Vanessa Isiguen (Roberta), and Cynthia Cook (Sondra), all members of the Glimmerglass Young Artist program, offered a skillful reading of what is surely a difficult score. Isiguen deserves special praise for bringing a compelling sound and notable stamina to that character's punishing scenes. Patricia Schuman, playing Clyde's mother made a solid go at this role, so unforgettably sung by Zajick in the premiere, but it is clearly a tall order for any mezzo without Zajick's unique upper extension, and Schuman had a rough time in her upper register.

Kudos to Zambello and Glimmerglass for revisiting this work, which surely deserved the additional hearing that the Met canceled at some point. While my enthusiasm was certainly more measured this time around, Picker deserves continued support and the show, with its juicy principle roles and Americana source material, ought to be a consideration for American companies looking to produce tested, accessible recent work.

As always, I enjoyed reading your impressions. However, I'd like to point out that though Zambello directed the original Met production, this one was staged by Peter Kazaras.

D'oh! Thanks for the catch--corrected in the text.

Within Goof Island, gamers possess a lot of choices at any time, Grossman explained, using eight different actionwords to try out and an supply filled with goods that modify people verbs.Conversely, Web site offers a single principal device utilized to resolve most of the gamblers problems.
Cheap Fifa 15 Coins