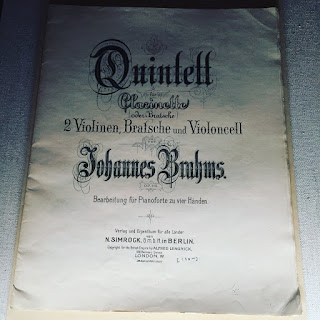 Amidst some nasty pre-snowmageddon precipitation, musicians from the Marlboro Festival served up the first of their two off-season tour shows at the Library of Congress Wednesday evening, injecting a bit of that gentle Vermont summer into crappy mid-Atlantic January.

Having made it to Marlboro the last two summers, I will disclose that I have fully drunk whatever the audience version of the Marlboro Kool-aid is. Whether it is the time that participants are able to lavish on a single work, the sense of camraderie, or the bucolic setting, there is something very special about Marlboro performances (obligatory link to Alex Ross' article from a few years back). Time and again one finds a depth in precision, blend, and articulation that ensures these performances are never boring, and it is enough to keep audiences (and musicians) traveling back to the country to get another hit of that sweet sweet chamber music drug. Happily, the stuff they export shares many of these winning qualities, too.

Beethoven's String Trio in C-minor, op. 9, featured the gorgeous blend of violinist David McCarroll, violist Daniel Kim, and cellist Marcy Rosen, in a reading both aurally decadent and musically engrossing. The first half also included Kryzysztof Penderecki's 1993 quartet for clarinet and string trio, adding the violin of Emilie-Anne Gendron, and Anthony McGill, principal clarinet of the New York Philharmonic. This fascinating piece covers huge thematic and emotional ground in its brief running time, and the quartet brought out moments of tremendous beauty (Gendron's solo in the closing Larghetto) as well as controlled frenzy in the second movement.

The second half featured a bit of unabashed luxury programming in Brahms' late Clarinet Quintet, famously composed near the end of his life after he had considered giving up composing. His collaboration with the clarinettist Richard Muhlfeld stayed his retirement and produced some of the most beloved works in his entire output and enduring pinnacles of the literature for the instrument. I will also note that this past summer in Vermont, I heard Rosen lead a performance of the Brahms String Quintet in F Major that immediately ranked in my top Brahms encounters of all time, so needless to say, this was an exciting prospect.

The Marlboro crew turned in a furious first movement, reaching for blistering fortes that immediately belied the "autumnal" modifier usually applied to this work. If things got a bit aggressive at times (and McGill occasionally seemed overextended trying to compete with the strings), the choice made sense in the striking contrasts with those moments where the movement slows to catch its breath. The Adagio offers the most intimate and individual writing for the clarinet, and McGill provided a solo of overwhelming beauty and quiet touches of personality. The interplay here between solo and strings, the epic push and pull of emotional tension, all unfolded with irresistible vitality. After a gentle Andantino, the group delivered a moving closing Con Moto, by turns yearning and ambivalent, a palpable chill descending with the arrival of the final dark figures in the strings.
Posted by Alex at 1/22/2016 02:41:00 AM

Are you paying more than $5 / pack of cigs? I'm buying my cigarettes from Duty Free Depot and this saves me over 70% on cigs.