So, about that Dutch Salome...Parterre has a clip, natch.

First things first: Opera of the Netherlands is housed in the Het Muziektheatre, a modern hall at the southern end of the city's old town. I got a very nice seat on the fringe of the orchestra for less than the price of the Met balcony, tho I think it might have been partial view for the supertitles (surprisingly only in Dutch, since it seems pretty clear that language has about 50 years tops before everyone gives up the ghost and starts speaking English.) Audience (for a Sunday matinee) was probably a notch more hip than your usual Met or Lyric audience, like the usual oldsters plus the monied end of the BAM crowd. 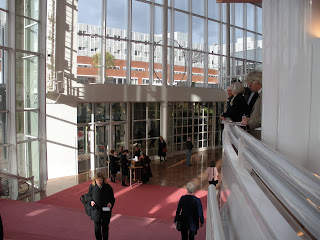 Anyhow. The Salome on view is a fascinating production by Peter Konwitschny, a high practitioner of the sorts of things we apparently will NEVER be able to handle here. Here's a bit of an interview with him.

In Konwitschny's concept, Jochanaan is never down a cistern, but rather a guest at Herod's dinner party of debauched gangsters--something like the last supper of the Patriarchy. While he is clearly conflicted, he is really no more than another face of the male power structure which keeps the other women in the play--Salome, Herodias, and the Page--in a constant state of fear/degradation. Konwitschny makes explicit a dynamic which Strauss and his libretto strongly suggest--it is after all, at base, a tragedy about Salome's innocence, regardless of how much depravity one finds in her, and we can't help but sympathize with her against Jochanaan. Here, we are led to understand his cruelty as part of the same sick universe in which female sexuality is both a commodity to be abused as well as a dangerous threat to the status quo.

As Konwitschny begins to engage in deeper subversions of the superficial action-- Herod executes Narraboth, and Jochanaan uses his death as a chance to appeal, in vain, to the better nature of the other guests--he introduces a distinction between the play as it is being performed, and a sort of transgressive space outside the play which he uses to posit an 'alternate' conclusion.

After a frenzied dance of the Seven Veils which includes the entire cast trying desperately to escape the play and then (I think) slaughtering each other, Salome receives Jochanaan's head as usual--but then hands it over to him so he can think about what he's done. The dining room set begins to recede from the proscenium and he is left alone with Salome on an empty stage, confused and lost. Through this violent reversal, Salome has saved him, wresting him from a his sick institutions, and facing him as an equal. Removed from the brutal machinery of the play, they acknowledge their love for each other, and run off together. And in a way, isn't that how it really ends? With ecstasy and rebirth and the overwhelming joy of finally understanding?

Now, mind you, the subtext was flying pretty fast, and I was working from memory of the libretto, so this really just scratches the surface of the richness of Konwisthny's conception. 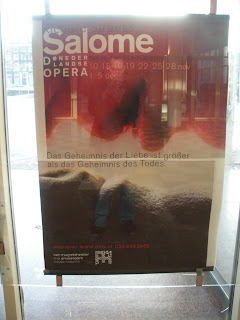 At the same time, one must point out the inherent failings in such an enterprise. While I really was quite intrigued and sort of touched by the ending, there was nary a shred of that overwhelming emotional experience that non-bizarro universe Salome is designed to produce. There was also a lot of gratuitous regie bullshit--Narraboth's corpse getting sodomized by everyone onstage, Salome helping Herod do heroin, an extra gory Jochanaan head with bonus shoulder still attached (actually, I kind of liked that), etc.--which came off as the usual finger to the audience that tends to sour one on an otherwise very interesting and nuanced project. (To their credit, a few courageous Dutch patrons did send that gang-rape a little boo.)

Annalena Persson was a so-so Salome. Vocally capable enough but not much going on in the sumptuousness department. I kind of think she may be a pretty great actress, though it is hard to tell, when you're ready to judge a SALOME and instead you get a KONZEPT. She, uh, was really convincing when she reversed that male gaze, I guess? That said, girl was game for ANYTHING, so credit is due there.

Primary vocal honors went to Albert Dohmen's rich, magnificent Jochanaan. None of that shouty business that plagues so many of them, but instead a warm commanding tone that brought out many of beauties of the part that you know are in there but don't necessarily get a chance to appreciate in performance. Dohmen also really got the characterization Konwitschny seemed to be going for here, bringing many human touches to Jochanaan's initial weary resignation, tortured questioning, and final revelation--i.e., that him and Salome should totally get married and have babies.

Additional shout-outs to another great Narraboth by Marcel Reijans (of all the challenges of the opera world in 2009, not enough good Narraboths sure isn't one of them, is it), and a Herodias (Doris Soffel) who made more effort than most to sing through the shrieking, to nice effect.
Posted by Alex at 12/04/2009 01:14:00 AM

I loved the opera house in Amsterdam. I caught a production of Les Troyens a few years ago. Superbly sung. (An unknown - at least to me - Yvonne Naef sang Didon superbly.)

Did you get to any Concertgebouw concerts? What a great hall! (Let alone what a great orchestra!)

You've whet my appetite (a.k.a. given me the munchies) for a return trip to Amsterdam.

> is housed in the Het Muziektheatre

Unfortunately didn't make it to anything at the Concertgebouw...fellow travelers' priorities intervening and all of that. MUST do that next time...

You will love Het Concertgebouw. In addition to the RCO, there are many orchestras, chamber groups, and soloists who play there.

One superbly awesome Amsterdam musical happening I had - under an overpass near the Riiksmuseum or the Van Gogh Museum (I forget which), there was a brass ensemble playing Bach. The acoustics were superbly awesome, as we were essentially in a tunnel. I either gave them about 15 cents or 15 euros, as I was pretty stoned and I couldn't figure out Euros, which had just come into circulation.