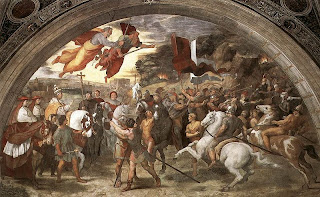 Raphael's Vatican fresco of Attila meeting Pope Leo, part of the series on 1st Millennium Christianity WIN.
For its fall show this past Friday, Washington Concert Opera presented Verdi's Attila headlined by John Relyea and Brenda Harris and an excellent supporting cast.
I missed out on the Muti-led Attilas at the Met last season so this was really my first experience with it. Musically, its neglect is certainly unfortunate--lots of colorful orchestral writing, a string of excellent if not quite top-40 arias, and some thrilling ensemble/chorus numbers. Libretto wise, however, its curiosity status makes a bit more sense. Editing isn't the problem--Attila is all business in banging through its plot points--but rather that the dramatic possibilities of the characters aren't quite realized to the point where they take off.
Attila is really the most interesting and, in a way, sympathetic character onstage. Being a Hun and all, he starts the opera indifferent to anything that doesn't involve pillaging, but is moved by Pope Leo to renounce his plan to sack Rome and ends up making a short-lived truce with the Italians. But, Michael Corleone style, he is pursued by his past wrongs and ultimately gives into and is undone by his thirst for blood and power. That arc also comes with a love story--part of his attempt to be a better barbarian is his love for Odabella, daughter of the general of the town he has just destroyed when the opera starts--but she of course has sworn her revenge and ultimately stabs him. Certainly a lot to work with in the tragic anti-hero department, right? But Attila's best music passes without much in the way of psychological engagement and he is virtually a bystander for Acts II and III until he is unceremoniously dispatched. Perhaps Verdi hasn't quite invented the signature introspective baritone aria that serves his later works so well, or perhaps the sublimated political agenda that runs through the work precludes any stronger sympathy for Attila. Either way, the piece feels like it revolves around a missed opportunity.
The same limitations afflict Odabella's character as well. The setup is clutch: she is introduced with that powerhouse aria about the badassery of Italian women which perversely attracts her father's killer to keep her in his camp. The potential for some internal conflict between her need for revenge and some mutual attraction with her captor is high, especially after we meet her wet blanket of a boyfriend (Foresto). But again, Odabella is largely sidelined after her aria opening the first act (a strong showpiece but emotionally static). These possibilities keep the drama interesting for a time, but ultimately do not move the plot.
* * *
Washington Concert Opera's production, if not quite a homerun on par with their Werther last spring, had lots to recommend it. Antony Walker excelled in demonstrating how much more there is to this score than oom-pah, and shepherded some riveting climaxes with the massed chorus and principals.
As discussed above, an Attila is somewhat disadvantaged by the material he has to work with, but John Relyea still seemed underwhelming. Its a fine voice certainly, and he turned in engaging readings of the main arias, but he lacked the authority required to give Attila much a commanding profile. His voice is probably not ideal for this work, which would benefit from some blacker flavor than his very pleasing instrument delivers. But still, it was a bit casual.
Brenda Harris made the strongest impression of the principals--here is one of those remarkable voices that is just naturally at home at its loudest. On the evidence of that killer first aria, I was a bit concerned that she actually didn't have a viable piano. But those fears were dispelled in her first Act aria, a smorgasbord of chilling effects, which, if not always the priddiest, were deftly executed and made for the evening's second biggest showstopper.
As whiny boyfriend Foresto, Arthur Espiritu brought a sweet beguiling tenor and fine sense of Italian diction and style (as I understand these things at least) that made his multiple arias a musical highlight, even if the drama could benefit from a lot less Foresto. That said, I see where Anne Midgette is coming from here--a sound like Espiritu's is more suited to an Ernesto than, say, a proto-Manrico, and there's certainly an argument to be made that the role should lean heavier.
James Stearns' Ezio (this Italian buddy of Attila's that ends up conspiring against him who also gets a questionable amount of stage time) was a strong player as well, bringing a rich baritone to the role and good command of the role.
Kudos as well to the assembled chorus, who offered the kind of precision that allows one to really take notice of the choral writing.
Next up, Saturday night's WNO opener...
Posted by Alex at 9/11/2011 09:21:00 PM

Recently 'discovered' Brenda Harris via Michael Mayes' "Texapolitan Opera" podcast, which led me to her Web site and various YouTube clips which show her to really be something, glad she made such a good impression. The opera itself? Well, saw it years ago with Ramey, and while it has its moments I find it largely unsatisfying - and it's definitely front-loaded, yes.

Re: Brenda Harris, right??? Voices like that are 1) just guaranteed to get the audience going and 2) in short supply. Why am I just finding out about her now?

Re: Attila, I'm wondering if a winning cast plus a balls out regie interpretation is the way to go. I mean, you could f with those characters all you want and no one would care, plus its got all sorts of political stuff to play with. I mean...barbarians vs. Italy? Anyone?

Alex, it's Jason Stearns, not James. He has a first rate Italianate baritone and should be far better known than he is.

Brenda Harris has been around a long time, actually. I believe she has been on the MET's roster but probably as a back-up artist rather than a regularly scheduled one. I've heard her as one hell of a Vitellia in Mozart's Clemenza di Tito, and a dangerous, sexy, funny and moving Agrippina in Handel's opera of the same name. The lady is a class act.

Your comments on Attila are interesting in that the rather enormous drama from which the opera is adapted presents him as a kind of extremely noble savage, probably more moral than the Italians who plot against him. The historical Attila was hardly the uncouth barbarian he was made out to be in the Roman world. He had a Roman architect/engineer in his retinue whose first task whenever a camp was established was to get a Roman-style bath house constructed for the use of the conqueror and his inner circle. Attila received Roman embassies with proper protocol and lived unpretentiously as to personal adornment. On the field of battle he was a renowned strategist and charismatic leader.

Most (not all) historians now dismiss the Pope Leo story as myth and believe Attila was turned back by such a serious famine in Italy that he risked losing his forces to starvation if he remained, preferring to settle the strongest terms of tribute he could get and then retire to the Danube region.