Don't Cry For Me, Violetta -or-I Am The Boss of You 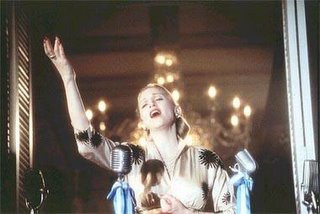 In September, a friend said to me, "You really need to make an effort to see the Gheorgiu Traviata. I played it for my students, and even the ones who never show up cried."

At the time, I had already sort of categorized this star-centric incarnation of Verdi's heartbreaking-est of scores as just that: a sort of novelty event that would be perfectly pleasant, filled with anticipatory buzz, and ultimately leaving one with a small sense of disappointment.

As is often the case, I was truly mistaken.

Despite a rather "sing out Louise!" start, Gheorghiu's Violetta was pretty much out of this world. Light as air, yet full of rich, sexy tones, I found myself thinking "I finally get it. THIS is what a knock-out lyric sporano sounds like live." I know it sounds oversimplified. I think it may not be, really. She is just a damn good singer who is all but perfect in this role.

On a sidenote, I find her to be one of the more amusing divas. There were things about her curtain calls last night that gave me the giggles for the remainder of the evening. She did this sort of hilarious Madonna-on-the-balcony-in Evita thing with her right arm, bent at the elbow at a 90 degree angle, knuckles facing the crowd, followed by enthusiastic waves and eye contact with the Balcony Boxes...as she calmly stood on the stage for an unusually (and delightfully) long time to accept the love. In the last curtain call, Ms. G was the boss. She was leading the cast rather forcefully by the hand about the stage, ensuring each side of the house had their turn to spew glory. And...*ahem*...spew we did.

The love, however, was not reserved for the tragic heroine alone. Jonas Kaufmann's Alfredo was met with -almost- as intense a flood of approval. This, folks, is a good tenor. It is a very grounded, powerful, and remarkably consistent voice that only showed weakness in the highest of registers. As an actor, he brought a fair bit of emotion and hormonal energry to the role, and was well paired with Gheorghiu's appealing doses of high drama.

Anthony Michaels-Moore turns in a very capable Germonthttp://www.blogger.com/img/gl.link.gif. It is a big voice, and despite a few awkward attacks, very listenable.