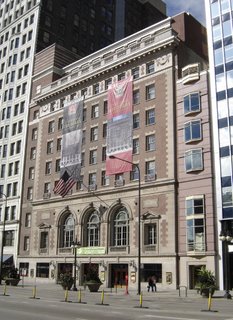 Considering Chicago's terrible stinginess with teh opera (Lyric takes 3 WEEKS to cycle in a new show!!) I have been pursuing some contingency measures to get that sweet, sweet, fix...most recently Matthias Goerne in a program with the CSO this past Saturday, doing selections from Des Knaben Wunderhorn (translation, courtesy J: "The Boy's Wondrous Horn").

First, the remarkable: that dreamboat baritone does not disappoint in public--it's all the chocalatey goodness I had come to expect from the records, and I was actually a bit taken aback by the power he can bring to bear where appropriate (despite confirming that this is essentially a Euro rather than Met-sized instrument). The readings were sensitive, thoughtful, introspective, seamless, etc., etc.

The small quibbles: So, I'll admit it. There were moments when I had that creeping sense that this is what they mean by a CD-voice. As noted above, it is a marvelously beautiful sound, like, ballpark platonic-baritone beautiful--but I found myself a bit distracted. Not that he's a cold interpreter by any means, but just that rough edges are actually something of a boon to effective live performance.

The Woundrous Boy-Horn Songs: Is anyone else just not that into these? I mean, yeah, there are gems, but I can't shake the sense that there's a bunch of filler too. And I like Mahler's songs! Hook me up with the Lieds of the Earth or the Dead Kid Songs and I'm in heaven. But the Wunderhorns? So sue me...so much of it just feels like Mahler phoning it in.

And oh yes. The non-opera-related-program-activities of the second half. Maybe I just didn't give the NY Phil a chance, maybe it was Avery Fisher, or maybe they just really aren't that interesting a band--but boy am I psyched to be back in a town with a marquee orchestra I can really root for. The CSO under Paavo Jarvi (Neeme's brother?) turned in a simply bitchin' Shostakovich 10 which I'm still giddy about 48 hours later.

I am generally of the opinion that Shostakovich is poorly served on headphones, so this was an extra super lucky treat for me. The brilliant ecstatic clarity of the orchestra, the commitment of the soloists, the sheer noise deployed. It was a breathless, bravura performance from start to finish. In contrast to my (slight) misgivings about the time with Goerne, Shostakovich as heard here simply can't be reproduced on disk.
Posted by Alex at 10/09/2006 07:44:00 PM

Alex: your description of Shostakovich makes me curious enough to break out of my current opera-and-scissor-sisters-exclusive listening schedule. I must admit that I also love the current Soviet-chic packaging design from the Decca discs.

Carnegie has the Bavarian Radio Symphony Orch coming soon - a performance of the Shost 6 plus Karita Matila singing Strauss 4 Last Songs. PLUS a Rosenkavalier Suite. (Which a friend described to me as "Baron Ochs music minus the annoying Ochs.")

Alex, I am jealous. The CSO is superb. They come to Carnegie in December with a few Boulez performances.

I just got back from soon to be departed Tower Records with both the Scissor Sisters and a Soviet-chic packaged copy of Shostakovich quartets 3/7/8 in the bag. Funny, that universe...

Alex: you know, I never listen all the way through "Of the Boy the Crazyhorn" but there are a few songs in there that are absolute top notch Mahler. Das Irdische Leben, well performed, can make you renounce everything and start wandering the desert. And Revelge is terrifically creepy. Nothing as shattering as Das Lied, but lots of bits of brilliance.

Me, I've never liked the Dead Baby Songs that much, my feelings about children notwithstanding.