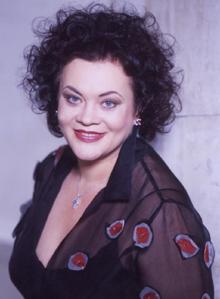 I promised myself I'd find a way to begin this post with something other than the obligatory mention of how completely retarded the libretto is for La Gioconda.

But let's face it folks. It's retarded. Like, really really retarded. It's also really long--partially because of the 3rd act ballet featuring man-with-ass-of-chiseled-stone spinning very swiftly to the rousing tune of "Hello Muddah, Hello Fadduh"

Remember on METropolitan OPERA's Opening Night® how you could hit the button on the Met Titles™ a second time and read the translation auf deutsch? I was a little bummed that feature was not active for last night's performance. I guess that was just part of the pizazzerie. It would have been fairly sweet to try to figure out Gioconda in German. I actually went in last night having spent only a marginal amount of time with the music, and clearly NO time with the libretto. Consequently, I spent most of Act III giggling (what with Gioconda astutely anticipating Laura's demise, and showing up with some of Juliet's leftover "deathlike slumber" potion).

Speaking of deathlike slumber--The Tylenol PM are kicking in. I really should say something of some substance pretty quickly here so I can get to bed.

So here goes. Violeta Urmana is completely genius. Her performance was basically flawless vocally--and surprisingly impassioned: reports from rehearsals led me to anticipate a perfectly sung, but potentially dry reading. Not so at all--she managed, pointless libretto and all, to evoke full sympathy, while never giving up her position as the absolute and only master of her own voice. I guess that is what most impressed me--there was never any worry that a/"the" note wouldn't be there, or that a phrase would end abruptly. She may be the reigning mistress of reliable excellence. The R.M.R.E.(?)

That said, I have been debating whether to say this...and this is coming from someone (me) who is flying to Chicago in a couple of weeks to see the Voigt Salome, but...based on last season's Forza, Tosca, Volpe ('member him?)Gala, and a couple shaky reports from San Francisco's Ballo, I am beginning to wonder if Urmana is in fact the one to beat. Not that such comparisons or musings are totally worth our energy--but seeing as Voigt is singing Gioconda chez Met in a couple years, it was on my mind last night.

As for the rest--Chilaquiles Machado's Enzo was less exciting than I had hoped. He sort of falls into the category for me of "acceptable-plump-italian-opera-singing-tenor". His voice has moments of exceptional focus, but it tends to spread a bit in the upper registers. His phrasing is largely mechanical and his stage persona very much of the "stand and sing" variety.

Olga Borodina, as expected, was totally wonderful. This is only my second time hearing her live (the first being her Dalila last season). She is such an impressive singer. And the sexy, rich tones in that voice...she's rapidly becoming one of my favorites.

Rounding out the ladies was Irina Mishura's Cieca. While it was most fun indeed to imagine Podles(!) singing the role, one could not help but be distracted from one's big Polish fantasy by the fact that Mishura was actually totally fantastic.

As Barnaba, baritone Zeljko Lucic was showing signs of wear and generally not my favorite. And Paata Burchaladze, whose massive bass never fails to impress, despite an increasingly wide vibrato, turned in an appropriately sinister and vocally solid Alvise. Not knowing the score all that well, I am going to decline to comment in any substantial manner on Bertrand de Billy and the orch...but I will say that I was impressed with his energy--even having conducted the season prima of Faust the previous evening, he was among the most alert and lively in the room come curtain call.

Okay, yeah, the libretto is incredibly dumb and incomprehensible; still, I have three recordings of it, because it is first-class junk. :-)

And, honestly, if you've never heard it, that famous broadcast with Martinelli and Milanov is really and truly worth hearing and (contra certain lunatics) not just for "Enzo, adorato." Great singing and hell-for-leather conducting.

Jeez, and I meant to say, I was surprised to like Gruber in last year's Forza so she is among the sopranos to beat.

(I think this is partly because her diction is always very crisp - not idiomatic, but crisp. Also, when I hear her very distinctive timbre, I immediately think of Sieglinde, Ariadne, Isolde, Chrysothemis, Leonore(Fidelio), etc. (This is one reason why I absolutely adore her Cassandre in the Dutoit Les Troyens - her French is crisp and clear, and yet she doesn't sound German.)

An added treat of the Bareclona La Gioconda was Ewa Podles as La Cieca. She's one blind woman you don't mess with...

I too am going to hear Voigt's Salome in Chicago - November 11 - when are you going?

Urmana sang a recital in Chicago a few years ago. It was sponsored by a Lithuanian opera company and the publicity was mostly within that community. She sang lots of verismo stuff and was fantastic. Didn't see any reviews either. I've seen more people at a college student recital...............

dan: I went to that recital. It was bizarre, as an event.

I dunno Lisa..there's quite a wobble on that Gruber. I am willing to keep an open mind, though :)kuo

maury: Yes indeed it was, as were the rehersals, which I "had to" attend. She half assed everything, but opened up in the concert. She refused to sing anything in Lithuanian, which is actually kind of as beautiful as Italian sometimes. That company is... well... what it is. I love her Tristan recording though, and would run to see her again.

Ugh - Gruber. I have yet to see/hear the appeal. I heard her sing in Verdi's Requiem last year at Carnegie with the Atlanta Symphony Orchestra. She was horrible. The vibrato was bad, but her pitch problems trumped the vibrato issue. I felt bad for poor Stephanie Blythe, who sang magnificently, in having to duet with her in the Agnus Dei. I had to block my ears and pray for God's mercy. Gruber's overacting in the Libera Me added to her horrific pitch problems made me fear death so much that I though about rejoining a church. I consider listening to Gruber a "coercive interrogation technique" forbidden by the Geneva Convention.