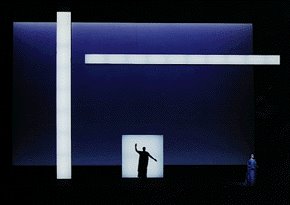 For the past couple of months my work life has not allowed me the time nor the psychological respites needed to properly realize, in writing, my thoughts and questions about the handful of excellent (and a few less than excellent...) recent operatic outings.

How can I not use this opportunity to gush, to emote...to break away from working on the delivery of Marie-Antoinette crew contracts to Sony Pictures.

The truth is, last night's performance of Robert Wilson's breathtaking, austere production of Lohengrin is the first thing in awhile that truly inspired me to lay out some of my thoughts and IMMORTALIZE THEM FOR ALL TIME ON THE WELLSUNG BLOG.

This is not to say, obviously, that there haven't been other blog-worthy evenings:

I just about passed out over my love for Mazzepa, popped my Wagner cherry with Washingtonal National Opera's questionable Zamblello production of Das Rheingold (Starring Sacajawea as Erda!), was delighted at Don Pasquale, bored at Fidelio (despite my girlfriend Karita and her dance party), outraged at Mark Adamo's Lysisrata, and generally underwhelmed by NYCO's Don Giovanni.

Characteristically behind the curve, last night was my first experience with Wilson's production, and my first time hearing any of the singers in these roles. Admittedly, I went in wanting to love it. So imagine how pleased I was when I found myself utterly wrapped up in the whole experience.

I have been considering proposing marriage to Karita Mattila. The woman is really pretty genius. I wholly understand those who have reservations about her, especially in certain repetoire. Her voice has some strange quirks up top, though it remains reliable. She is obviously a very skilled singer, and a bona fide actress. What pushes her into glittering divadom is a sort of unflinching committment to whatever it is she has been asked to do. Even in Fidelio, which is truly saying something. She completely immerses herself, physically and psychologically, in the beautiful austerity that is this production. She executes Wilson's slow mo staging with total deliberation and unmatched concentration. All the while, her singing is truly at its finest. Even those who are less enamoured of her were commenting on her exquisite sound. Her Elsa is truly a singular experience.

Ben Heppner (hencforth known as Hep B) delivers the title role beautifully, though it sounds to be a bit of an effort now and then. Not problematically so by any means, but there is a tiniest bit of audible tightness--just a certain lack of vocal freedom, and the occasional loss of steam in his mid-range. But the upper registers are bright and thrilling, and he sings with heartbreaking sensitivity in the final scene of Act III. He really is the Lohengrin to beat.

Richard Paul Fink's Telramund was a nice surprise. His focused, powerful baritone sound was at once beautiful and appropriately sinister. This was my first time hearing him and he has found a new fan. I am wondering if he will be in the Met's Doctor Atomic in 2008--if memory serves he was in the cast in San Francisco?

Luana DeVol jumps in head first as Ortrud--she clearly LOVES being in this production. She does a sort of Baby Jane meets Norma Desmond thing and it is pretty hilarious yet at all times wholly appropriate. Her singing...well, let's just say I will buy it as Ortrud. It is not a beautiful sound--which is totally fine for this role. But, there is some unsteadiness up top, which is less fine. When she evokes Wotan and Freia I want feel like those Space Mountain/Austrian chandeliers are going to come crashing down (Freia forbid). I didn't really--you could feel her holding back just a tad. I am hoping in subsequent performances she will just let it rip...I think she hs the goods to do it. I give her my conditional stamp of approval.

So, Alex and I (and possibly Maury) are going back next week. I am already excited. Between now and then, I think all I have on tap is an Acis and Galatea at NYCO. So, that may be fine, but I will be in serious need of a Grail Knight by Monday.

Until next time, my Lieber Schwann(s).

AND AT LEAST ONE PRISS

AND WHERE'S YOUR DECENT

KARITA MAY BE TROUBLED

ARE A WONDER DOUBLED

Hi!
I like your story.
But you'd better take a look here to find a really DIFFERENT dating site.
Looks amazing, agree? :-)
You can also find my pics and more about me on my page www.livedatesearch.com/jessica
Read more about me or drop me a message from there.
Chao!
Jessica

After seeing your Blog I can say that it’s very nice and its content is also very nice.
WoW Gold is the topic which I like most to write
about. I fact I was looking for information regarding WoW Gold and I reached in your blog. But very nice Blog. I liked it.