Among the hobbyhorses at AC Douglas' excellent Sounds and Fury (check out his series on the Ring) are "Eurotrash" productions of Wagner operas, i.e., it sounds like Parsifal but it looks like this (the 2004 Bayreuth production): 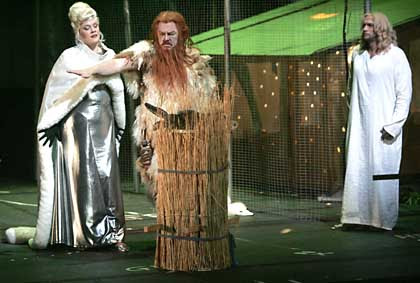 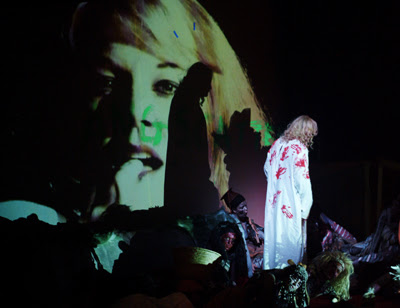 Approaching an inherited work of art with cynicism and deliberate hostility requires that work to be artistically nonfunctional, such that taking the text and applying it to contrary purposes is more successful and interesting than the work itself. In some cases it is both a warranted and effective choice. But in cases where the original work is still very persuasive in its own right, i.e., any of Wagner's operas, it is a recipe for an interpretation doomed to say one thing and one thing only. The entire thing becomes dominated by the single gesture of performing something against itself, and that's just not very interesting.

That said, there's a danger in rejecting radical productions out of hand, or of assuming that all stagings have to be either literal-historic or minimalist and unobtrusive. Case in point, the recent Stuttgart Ring DVDs--I've only seen the Siegfried, but it surely had enough outlandish tics to piss off the skeptics. Wotan goes about in a baseball cap. Fafner is a guy in a swivel chair. The woodbird is a blind androgynous ten year old in a hoodie. Mime jerks off during the hallucinatory section in the first act between Wotan's departure and Siegfried's reentrance.

Does all of it work? Of course not. But there were also wonderful moments that certainly enhanced my experience--like the "Siegfried" t-shirt Siegfried wears throughout, a constant reminder of the self-identification and childish arrogance of the character. Or Brunnhilde's making herself up during the final love duet--an acknowldegement of her truly becoming a human and a woman in this opera, and the mundane glories entailed.

Opera is a marvelously resistant medium, a reason why stage directors are probably so tempted to test its limits. But instead of focusing on the egregious mistakes, we should praise productions that teach us something new. No one production can get it all right--and this, after all, is a reason why the opera is still around--but the productions that advance our understanding on the margins should be supported.
Posted by Alex at 11/06/2005 01:57:00 AM

You seem to criticize Eurotrash, yet right after you describe a production of the Ring which you say you liked, that has all the characteristics of Eurotrash.