Primo first balcony tickets for you and your mother to Aida at Prague's National Theatre (Narodni Divadlo): $72 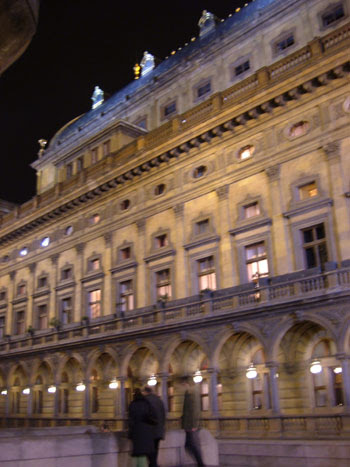 Good show Wednesday at Prague's National Theatre (pictures forthcoming)--Aida was Olga Romanko, a delightful Russian soprano who my mother thinks she's seen at Lyric before. Vocally, she was probably a cut above the other principles, with a big elegant sound and vocal money moments to spare. In the opposite corner, local girl Jolana Fogasova to' it up as Amneris. Early on, it seemed like she was getting lost in the orchestra, and I wondered if she could cut it in a bigger space. But this was largely forgotten by Act 4--her exchange with Radames COOKED. All requisite surl and bitterness was vivdly rendered, no doubt helped by the fact that she let the slavic vowels fly when letting someone have it.

Chilean Jose Azocar was a hit or miss Radames--at his best, he demonstrated a rich melting tone and strong top (thankfully moreso near the end), but at other times his vibrato was a little too wide and he sounded harsh. Among the supporting cast, the standout had to be Vladimir Chmelo (another Czech) who brought a lovely, effortless lyric baritone to Amonsaro. Production wise, there was something of an Aida-in-a-box quality, but no doubt grand enough. The choreography, it should be noted, came off much as expected, i.e. like an Eastern bloc remake of the "Walk like an Egyptian" video. Of the three houses that present opera in Prague, the National Theatre takes on the really big shows--besides Aida, their Ring cycle happens here as well. The dress code is somewhat more formal than in America, probably 85% of the men in coat and tie, including some in formal military dress, and some for reals dresses on the floor. There was quite a mix of old, young, and middle aged patrons, which just might have something to do with the fact that upper balcony seats can be had for 3 dollars...mercy. 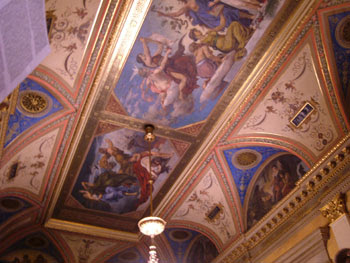 Best of all (besides the inexpensive intermission drinks of course), at the final curtain calls, no one bailed and there was no gratuitous standing ovation...instead the entire audience applauded vigorously through 3 ensemble bows and recognition for all the principles. I don't know why so many people at American opera feel they can bolt after the last note, but it is a much more satisfying end when ALL of the audience takes the 5 lousy minutes to show some appreciation for the artists onstage.

P.S. In Czech, Smetana also means "cream," i.e., "leave some room for smetana in my coffee," or, "smell this smetana and tell me if you think it's ok." That means his name is like "Bedrich Cream". For his sake, let's hope high school wasn't so cruel back then. 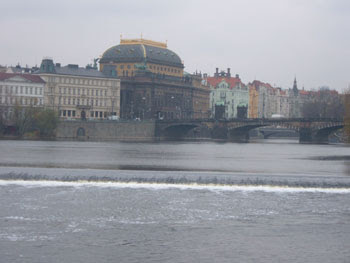 Hm, in Russia it's specifically sour cream. Smetana, I mean. The Moldau, by little Freddy Yogurt.

Thanks for the pics! That opera house is gorgeous.

I am jealous on so many levels right now.

Chalkenteros beat me to it, but I'd take one of those guys over the Muscle Mary's that infest WeHo and Chelsea any day.

Sure, the balcony was $3, but is it one of those situations where the average worker in Prague makes $100 a month or something?

Your mom going to send in her review?

Point taken, but I think it is still relatively cheaper. To use the international currency of alchohol: a beer in Prague, which costs the same or less than water or soda, is usually a dollar, so the cost of the balcony seat might equal 3 cans of Coke in the US.

As to your second question, I fear my mother lacks the writing chops of Mrs. Ferrantelli, but she did enjoy it as well.

Theatres are very good in Prague. So good decorations and talented actors. You will have deep impressions after visiting Prague theater.

Hello my name is Gabriella, few days ago i open my blog. I would like to add your site to my blog, that I think and hope it will help inform visitors about your site. I select for it's quality your blog - structure, design and content. I would like to ask if you can provide me more, details, information about your site.
my blog is http://mypragueradios.blogspot.com/ and you can leave your information in the comments of this page http://mypragueradios.blogspot.com/2008/05/page-for-friends.html

Day night,gold für wow the moon or on world of warcraft gold the tree,cheap wow gold Hao Jie pouring down the moonlight, as if accompanied by Xiaotu Feifei enter sweet dreams. In the dream, a dream Feifei about his sister to the moon night. Will open the door,wow gold kaufen go down the moon sister.mesos Xiaochanzouxia take is that they did not see the moon sister. At that time, anchored at the tree on the moon sister saw Xiaochan, they yelled loudly: "Feifei, Feifei, I tree, the tree, I." Xiaochan sit at the moon to his sister, who Daizhaoxiaochan came wow geld to the beautiful pond. Only, water,maple story mesos everywhere in the lush leaves and beautiful flowers.maple story items A frog squatting lotus leaf, see Xiaochan, surprised and said: "Xiaochan,wow gold farmen you can even sit on the moon. You simply It's amazing!maple story money I am sure that you are the first animals to the moon by the animal. good,wow leveling I envy you!Maple Story Accounts "Xiaotu listening, happy to smile. Then, with the moon sister Xiaotu to its home.powerlevel Only, the moon sister's home stars are everywhere. The eyes of a star a Zha Zha,world of warcraft power leveling like Xiaotu greeted the arrival of a mouth, like: "Xiaochan, Hello, we at the Moon Palace waiting for your arrival."maple story powerleveling Xiaotu listened,archlord gold smiling all of the 1930. Finally, the moon Xiaotu sister back home, also pleased to Xiaochan said goodbye. Xiaochan also pleased to the moon sister said: "The Moon sister Goodbye! You bring me to this night. Dainiqu next time I visit some of ourforests."

I think they might have won in the bathing suit war...
Those look a lot better than what LLL offered everyone.